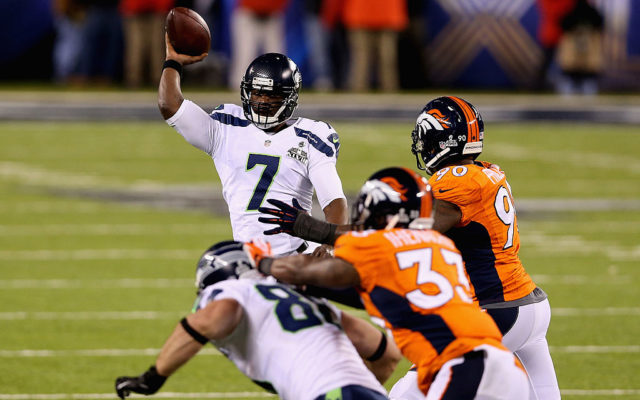 “According to the Alabama Law Enforcement Agency, Jackson was involved in a single-vehicle crash at 8:50 p.m. Sunday; the 2012 Chevrolet Camaro he was driving left the roadway, struck a tree and then overturned. Jackson was transported to a local hospital, where he was later pronounced dead.”

The Seahawks are stunned and heartbroken to learn of the tragic passing of legend Tarvaris Jackson.

T-Jack earned the respect of the organization and teammates with his competitiveness, toughness and professionalism. Our deepest condolences go out to his family and friends. pic.twitter.com/4YApkKaVnh

Jackson is survived by his wife and three children.

Some of Jackson’s former teammates and coaches chimed in on Twitter.

TJack… you will be missed. Praying for your family…Love you man. 💔

Tarvaris Jackson was my mentor! He played the game with dignity and taught me how to use my MIND 🧠 to manipulate the defense. When my family couldn’t make it to Seattle for holidays, it was TJACK who invited me to his house to celebrate with his family!

Tarvaris Jackson was a beloved teammate, competitor, and Seahawk. He will be deeply missed. So heartbroken by the news of his passing and sending our condolences to his family and friends. We love you forever @7tjackson

Jackson struggled to get playing time with Arkansas in 2001 and 2002. He transferred to Alabama State University and faired much better in his three years with the Hornets.

In his second season at Alabama State (2004), Jackson led the team to their second 10-win season in school history. The Hornets also won the Southwestern Athletic Conference (SWAC) Championship in 2004 as Jackson earned the game MVP award.

He turned his success with Alabama State into a being drafted in the second round of the 2006 NFL Draft by the Minnesota Vikings.

Then, he signed for two years with Seattle in the offseason before the 2011 season. Jackson had his best year as an NFL starter with his only 3,000 yard season (3,091) and most TD passes (14) in a single season.

Before the 2012 season, he was traded to the Buffalo Bills after the Seahawks acquired Matt Flynn and Russell Wilson in the offseason. He served as the third-string QB, but Jackson never saw game action with Buffalo.

He returned to Seattle in 2013 on a one-year deal. Jackson would end up being Wilson’s backup for three seasons. He won Super Bowl 48 with the Seahawks in Feb. 2014.