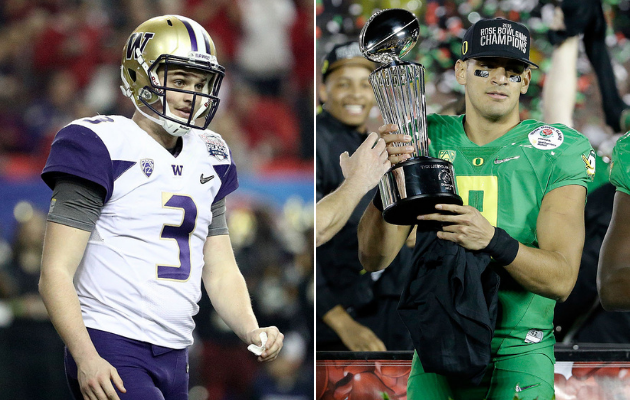 Seven years into the College Football Playoff, and ESPN’s Bill Connelly ranked the teams that reached the CFP Final Four.

Looking through the list briefly, it’s still alarming to see only two Pac-12 teams ever made the CFP Semi-Finals and only one to the Championship game.

It’s not like I forgot that Washington and Oregon are those teams, but it’s evident that the CFP suffers a bit from the old BCS problem. We don’t really know what makes a team “deserving” of a spot in the Top Four.

Now, I’m not arguing that any Pac-12 team deserved to be there this year, but there were definitely teams deserving in the past.

Along with the 28-team ranking, Connelly also put together a Top 10 list of the best teams that missed the playoff.

The full 28-team list and the “best of the rest” list are only visible if you have an ESPN+ subscription.

However, I’ll take you behind the curtain below…

The Washington Huskies team that made the playoff in 2016 ranks in the bottom half. Surprisingly, they’re ranked ahead of two teams in this year’s CFP, Notre Dame and Ohio State.

Out of the 28, Connelly put UW at No. 18. He acknowledges the Huskies “elite defense” that included NFL players Budda Baker and Greg Gaines.

“Marcus Mariota combined 4,454 passing yards with 770 rushing yards and 57 total touchdowns (and duly won the Heisman), and the Ducks handily ranked first in offensive SP+. They tallied 42-plus points in nine straight games and put up 59 on defending national champion FSU … but weren’t able score over the final 20 minutes of the national title game. An overwhelmed Ducks defense couldn’t hold Ohio State back.”

Obviously, the national championship game was disappointing, but the ranking feels a little low at first glance.

Oregon is ranked behind two teams that didn’t even reach the CFP Championship game.

I can forgive the 2019 Ohio State ranking because the game with Clemson was one of the best games from the CFP era. However, that 2014 Alabama team does not deserve to be ahead of the Ducks.

At No. 5 is the 2012 Stanford team that finished 12-2, which included a season opening loss to Northwestern and a two-point loss to the Ducks.

Then at No. 9, Connelly puts the 2016 USC team that was 10-3, where Sam Darnold replaced Max Browne and the Trojans rattled off nine straight wins.

Up first, the Rose Bowl semifinal between No. 1 Alabama and No. 4 Notre Dame in Arlington, Texas at 1 p.m. PT. Then, No. 2 Clemson and No. 3 Ohio State battle in the Sugar Bowl at the Superdome in New Orleans at 5 p.m. PT.

Both games are on ESPN.