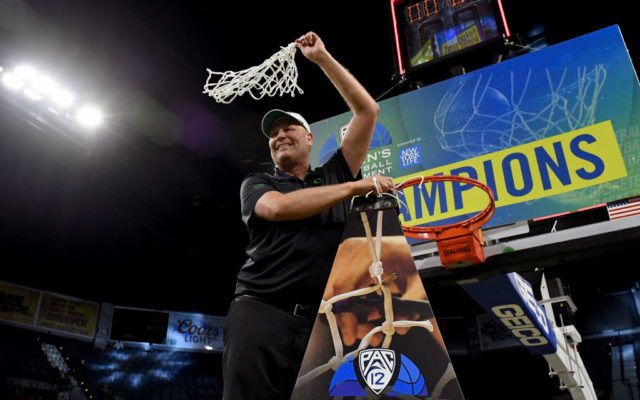 Four ESPN staffers debated a few things including who the Final Four teams would have been in 2020 and who would have cut down the nets.

Obviously, our headline gives away that they believe Oregon would win the National Championship, but it was an interesting conversation.

ESPN analyst Rebecca Lobo and Dot-Com’s Charlie Creme and Graham Hays picked the Ducks for different reasons. Web writer Mechelle Voepel decided to talk about South Carolina and Baylor because the “case has been made very well for Oregon” by the other three and “it’s hard to pick against [the Ducks].”

Lobo narrowed down her picks to Oregon and South Carolina. She said both schools were playing “their best basketball of the season when it mattered most,” and she expected that to continue in the tournament. Eventually, she picked the Ducks.

I give the slightest edge to Oregon for a couple of reasons. First, Final Four experience can matter, and most of the Ducks played on that stage in 2019. Second, their offense was humming. Sabrina Ionescu, Ruthy Hebard and Satou Sabally were consistently playing like pros, while Erin Boley and even Minyon Moore took turns having big nights. And they had the greatest competitor in the college game in Ionescu. Sometimes one player can separate a team. Oregon had that player. The Ducks seemed destined to complete their “unfinished business.”

ESPN’s bracketologist for women’s basketball, Creme, outright picked the Ducks in his first sentence. He also acknowledges the analytics, but says he picked Oregon with more than numbers in mind.

I greatly value the analytics, but my prediction that Oregon would have been the last team standing is strictly based on observation and the probable matchups that the tournament would have provided. The Ducks had three seniors in the starting lineup, three players pegged to be possible top-five WNBA draft picks this spring and the consensus best player in the country in Ionescu. That produced what was the best offense in the country all season, and of late it looked unstoppable, even in the nation’s best conference, the Pac-12.

The idea that defense wins championships is antiquated. Teams that can put the ball in the basket with as much variety, frequency and efficiency win championships. All three favorites played great defense (the Ducks had allowed just one opponent to hit 70 points since losing to Arizona State on Jan. 10), but Oregon had the most firepower. That’s why the Ducks would have been celebrating in New Orleans.

Hays doesn’t expressly disagree with Creme about defense, but he is more bullish on the Ducks defense being the reason they win.

Oregon has been good enough on the offensive end to win a title for a couple of years, but the Ducks finally looked good enough defensively this season. … Baylor and South Carolina were as good as it gets defensively. But neither was going to hold the Ducks to 61 points more times than not.

Finally, the ESPN group picked who they think would win the Final Four Most Outstanding Player. Surprisingly, none of the four picked Sabrina Ionescu, however, three picked other Duck players.

Lobo picked a player from both Oregon and South Carolina. For the Ducks, she selected Satou Sabally.

I think Sabally could have had a monster Final Four. She was relatively quiet in the last two games of the Pac-12 tournament, but she was in beast mode the second half of the season.

Boley would be my choice for unsung hero if Oregon were to have won it all. Oregon has so many offensive pieces that defenses are often forced to pick which Duck they will let beat them. With so much attention on Ionescu, Sabally and Hebard, Boley often has open looks. If she gets in rhythm, Boley is a knock-down shooter who is capable of hitting four or five 3-pointers in a row and blowing open a game or of making a couple of key jumpers in a tight game. It helps that Boley plays with a group of unselfish teammates and the nation’s leader in assists in Ionescu (9.1 APG). Against either or both Baylor and South Carolina, she would likely get opportunities, and as one of the best 3-point shooters in the country (44.1%), Boley would have a chance to go down in Final Four folklore.

Voepel named a player from each team “if they won,” for the Ducks she picked Minyon Moore.

Had Oregon won, Moore, a graduate transfer guard, might have been the spark; she brought a defensive toughness to the Ducks that was contagious, and she had a terrific offensive game in the Pac-12 championship game victory over Stanford.

You can check out the full story on ESPN here.