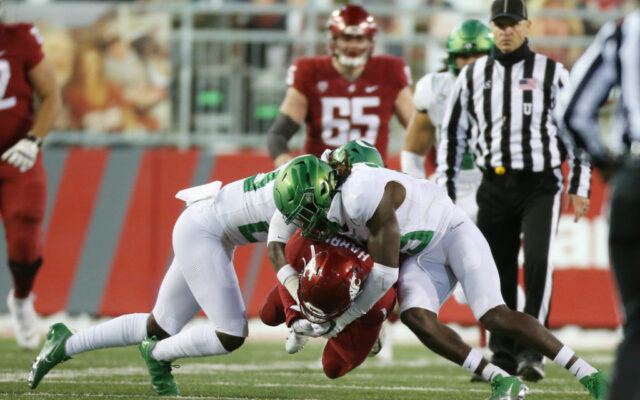 However, each Duck drive (except one) after that was capped off with a touchdown.

Washington State (1-1, 1-1) didn’t take advantage of the Oregon turnovers. They only scored 10 points off of the turnovers and just 19 points in the opening half.

Also, the No. 11 Ducks spoiled the Cougs 19-7 lead with a two-play, 17 second touchdown drive to give Oregon life going into halftime.

After the break, Oregon missed a field goal to start the third quarter, but after the mistake the Ducks turned up the heat on Wazzu.

Each drive after the miss led to an Oregon touchdown.

Tyler Shough and CJ Verdell weren’t their normal selves for the first 29:40, but they figured it out for the final 30:20.

The young QB led Oregon to an opening drive touchdown, but then he threw an interception on drive No. 3. In between those drives, Travis Dye fumbled on the second drive while Verdell fumbled in the fourth drive.

Something that should not be lost in this game is how Oregon shut out the Cougs in the third quarter, and held them to 10 points overall in the second half. Meanwhile the Ducks scored 36 points in the final 30:20.

Up next, Oregon is scheduled to face UCLA on Saturday after the game was originally set for Friday. A kickoff time is still to be determined.