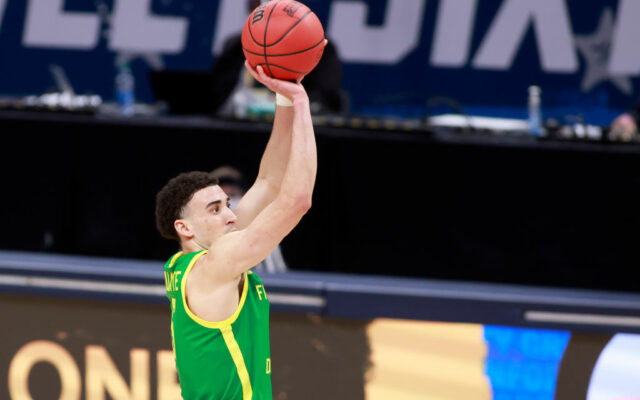 The Naismith Memorial Basketball Hall of Fame named their “Starting Five” awards on Saturday. Oregon Ducks senior Chris Duarte was selected as the 2021 Jerry West Shooting Guard of the Year.

Duarte also becomes the third senior to win the award in its existence.

He was just one of two players in the nation to average at least 17.0 points and 1.9 steals per game, while also shooting 50 percent from the field. Duarte is the only player to do so in a major conference.

In the Pac-12 specifically, he was among the league leaders in six different statistical categories. Duarte was also the only player in the Pac-12’s top 10 in both overall shooting percentage (.532) and three-point field goal percentage (.424).

The Puerto Plata (Dominican Republic) native finished second in steals and three-pointers made per game (2.4 in both), fourth in three-point percentage and sixth in scoring in the conference.

The conference coaches also selected Duarte to both the All-Pac-12 first team and the Pac-12 All-Defensive team.

Finally, he was a second-team All-American selection from Sports Illustrated.

For the Ducks, this is the second straight season an Oregon player has been selected as one of the five national Basketball Hall of Fame “Starting Five” awards. Last year, Payton Pritchard was the Bob Cousy Point Guard of the Year.