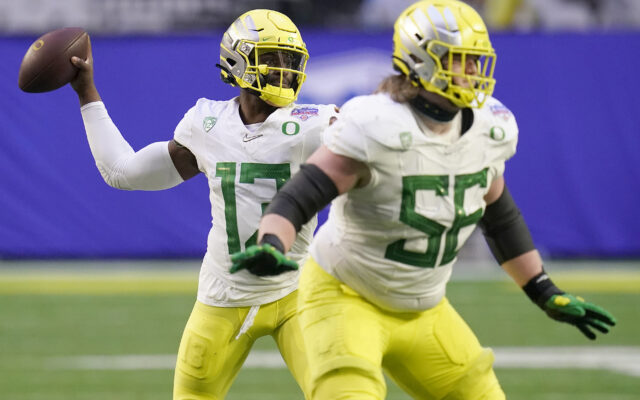 Coming off its second straight Pac-12 Championship, the Oregon football team will open the 2021 season at No. 12 in the USA Today Sports AFCA football coaches poll that was unveiled on Tuesday morning.

It marks the third straight season under head coach Mario Cristobal that Oregon has opened in the top 15 of the coaches poll. The Ducks are the highest ranked team in the Pac-12, with USC two spots behind at No. 14 and Washington coming in at No. 21. Utah, Arizona State, UCLA, Stanford and California also received votes.

Oregon will open the 2021 season on September 4 against Fresno State in Autzen Stadium before going on the road to face No. 4 Ohio State in Columbus on September 11.

The Ducks return nine starters on the offensive side of the ball, headlined by a pair of veteran duos in running backs CJ Verdell and Travis Dye and receivers Johnny Johnson III and Jaylon Redd. Oregon also brings back its entire six-man rotation on the offensive line after that unit entered the 2020 season with just one combined career start.

All-American defensive end Kayvon Thibodeaux leads the way on defense, where the Ducks bring back seven total starters. Cornerback Mykael Wright is coming off a first-team all-conference season in 2020 while linebacker Noah Sewell was the Pac-12 defensive freshman of the year, and safety Verone McKinley III provides veteran leadership on the back end.