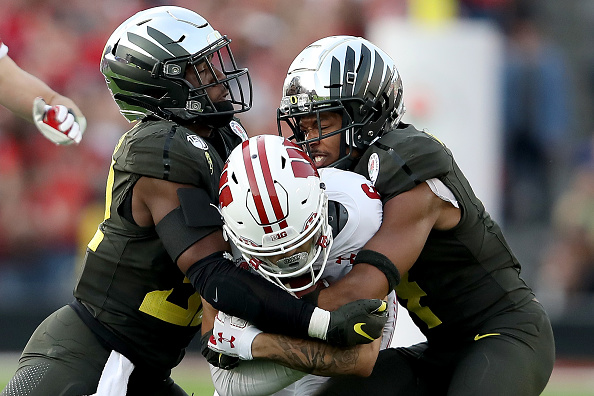 Oregon received to start the game, and CJ Verdell went right to work, breaking off a 9-yard run on the first play. Herbert found his man Juwan Johnson for a nice gain to get the Ducks into Wisconsin territory. Mycah Pittman made his return to the field after breaking his arm, and helped Oregon convert a 3rd down inside the Wisconsin 30 yard line.

Herbert’s arm got the Ducks a first and goal, and it was his legs that finished off the 12 play, 75 yard drive, with a 4-yard touchdown run. Oregon grabbed the early 7-0 lead.

It didn’t take long for Wisconsin to answer. On the ensuing kickoff, Aron Cruickshank exploded through the Oregon kickoff coverage for a 95-yard kickoff return touchdown.

LOOK AT THAT SPEED 😳 pic.twitter.com/ec8ju8gxHA

Things starting looking shaky for the Ducks, as Herbert was intercepted on his first throw of Oregon’s next possession. The interception set up the Badgers offense inside the Oregon 30 yard line. However, the Ducks defense stood tall and forced Wisconsin to settle for a field goal. Wisconsin grabbed the 10-7 lead.

At this point, Wisconsin had zero first downs and 1 yard of total offense, yet they held onto a slim lead midway through the first quarter.

It was clear that the Oregon defense was looking to load up against Jonathan Taylor and that rushing offense on early downs. The Ducks wanted to force Jack Coan and the Badgers receivers to make plays if they were to beat them.

The score remained the same as the first quarter came to a close. Oregon’s offense was out of sync after their opening touchdown drive. Wisconsin forcing a turnover, and then back-to-back punts following the early Ducks touchdown.

Wisconsin had possession to begin the second quarter. The Badgers offense faced a fourth down and inches at the Oregon 30 yard line, and were able to push forward on a QB sneak to convert. On the next play, Taylor took the ball around the right side for a big first down in the red zone, but the run was called back on a costly holding penalty.

The penalty backed the Badgers up to the 39 yard line, and Oregon’s defense was able to make a stop right around the original line of scrimmage. Wisconsin missed a field goal attempt on fourth down, and Oregon took over still trailing 10-7.

Oregon’s offense was stagnant and they were unable to capitalize off of the missed field, punting it right back to Wisconsin. It was the Ducks defense that stepped up once again, stripping the ball away from Jonathan Taylor and forcing a big turnover inside Wisconsin territory.

Just when you throught Oregon would take advantage and possibly grab back the lead, they were faced with a fourth and short. Cristobal decided to trust his offensive line like he had all year, but the Ducks were unable to get the push they needed as Verdell was stopped short of the line to gain.

Wisconsin still held a 10-7 lead midway through the second quarter.

The Oregon defense was the MVP of the first half. Thomas Graham picked off Coan to give the Ducks another possession in Wisconsin territory. This time, Oregon capitalized. Justin Herbert found Juwan Johnson on a 15-yard pass play to get the Ducks in the red zone. Herbert used his legs once again, running around left end for a 5-yard touchdown.

Aron Cruickshank nearly made a house call again for the Badgers on the following kick off return. Cruickshank set the Badgers up with great field position at their 47 yard line, and a chance to potentially take the lead back before halftime.

The Badgers thought they had a big pass completion down to the Oregon 1 yard line, but after review the receiver went out of bounds and did not reestablish himself in the field of play. The pass was called incomplete, however a defensive pass interference call gave Wisconsin a first down in the Oregon red zone.

With just 0:11 left on the clock in the first half, Coan found his big play target Quintez Cephus for the 11-yard touchdown strike. Badgers took a 17-14 lead into halftime.

Wisconsin received to begin the second half. Coan found Cephus for an early first down, but Oregon’s defense once again stepped up to force a punt. Badgers punter Anthony Lotti mishandled the snap and the hero from the Pac-12 Championship Game, Brady Breeze, scooped up the loose ball and ran it the distance to give Oregon the lead.

ARE YOU NOT ENTERTAINED?!

Defense and special teams was the story of the game to that point. Oregon went back to work on defense holding a 21-17 lead.

On the Badgers next possession, they found themselves in another fourth down and short just passed midfield. Wisconsin dialed up a great play action pass and hit Taylor coming out of the back field for a big 34-yard gain. With the ball now at the Oregon 11 yard line, the Badgers were able to move the ball just short of a first down near the goal line.

Oregon’s defense would face another fourth down, and again the Badgers convert. Mason Stokke ran it in from one yard out to give Wisconsin a 24-21 advantage with 4:53 to play in the third quarter. The Ducks offense had yet to see the field in the second half.

When they finally did see the field for their first offensive snap of the half, the Badgers forced a quick three-and-out. Blake Maimone’s punt was short and set up Wisconsin with great field position. The Ducks defense trotted back onto the field after minimal rest, and hoped to bail out the offense once again.

Another fourth down and short set up a big opportunity for Oregon to keep it a 3-point game as the Badgers were on the move in Oregon territory, but Wisconsin converted again to keep the drive alive. Wisconsin eventually hit a 27-yard field goal, extending their lead to 27-21 with 12:09 to play.

Herbert and the Ducks offense was finally getting the ball moving, as they found themselves just outside of field goal range at the Wisconsin 35 yard line. On third and two, Oregon decided to roll out Herbert to the left but no one was able to get open. Herbert took a disastrous sack back at the 43 yard line, and they were forced to punt it away.

It seemed as if the Oregon defense would need to come up with another big play to win the game. On second down at the Wisconsin 26 yard line, the Oregon defense did just that. Brady Breeze came up huge in maybe the biggest moment of the season for the Ducks. Breeze punched the ball out of the hands of wide receiver Danny Davis and Oregon recovered the fumble at the Wisconsin 30 yard line.

On the very next play, Justin Herbert’s legs did what they had done twice already in the game. They carried him 30 yards to pay dirt, and all of the sudden Oregon claimed a 28-27 lead midway through the final quarter.

Justin Herbert showing he has wheels too 💨 pic.twitter.com/sgeEfZjuGj

Both offenses were stopped each of their next possessions, and with just 4:01 to play, Wisconsin had the ball looking to put together a potential game-winning drive. Coan hit Danny Davis on a pass play for a first down, but an enormous offensive pass interference call brought the play back and made it third and very long.

The defense for the Ducks forced the incomplete pass on third down, and Oregon would get the ball back on their own 43 yard line, looking to chew clock and close it out with a few first downs. Mycah Pittman picked up a crucial first down on a pass from Herbert, forcing Wisconsin to burn their timeouts.

The Ducks just needed one more first down to win the game. Herbert hit Juwan Johnson on a screen pass to the left, and Johnson took care of the rest. Oregon took a knee and won the 106th Rose Bowl Game.

Justin Herbert is the first QB with 3 Rush TD in the Rose Bowl since Vince Young in 2006 🌹 pic.twitter.com/cFSA9hAtMp