College Football Schedule CENTRAL: What the Pac-12 and Other Power Five Conferences are Doing 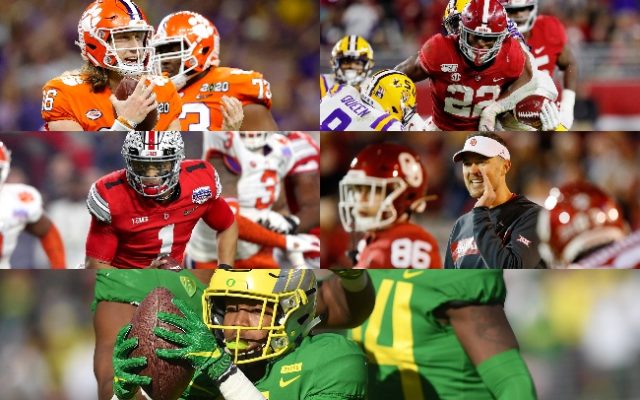 Pac-12 official schedule released on July 31st, with the game formerly known as the “Civil War” between Oregon and Oregon State set to be played in WEEK 4 of the 2020 season.

Check out the guidelines and protocols developed by the Pac-12’s Medical Advisory Committee.

The latest and biggest story surrounding the Conference is the news of the recent Pac-12 Football Unity Group, in which hundreds of Pac-12 football players put together a list of demands released on The Players’ Tribune Sunday morning.

The group included four main pillars; Health and Safety Protections; Protect All Sports; End Racial Injustice in College Sports and Society; Economic Freedom and Equity. Many players, including several high profile players on the Oregon Ducks have spoken out and are using #WeAreUnited on social media to fuel the movement and spread the message.

Oregon safety Jevon Holland was one of those players, saying in a statement to Sports Illustrated, “We’re not your entertainment, we’re human beings. We don’t know the long-term risks. I refuse to put my health at risk for somebody else’s benefit.”

The Big-12 will reportedly play a 9-game conference schedule, and one non-conference game.

Sources tell me and @NicoleAuerbach: Big 12 Board of Directors approved plan to play 9 conference games and 1 nonconference game.

The start of conference play for the Big-12 will be solidified in the coming weeks, with an anticipated start date sometime between mid and late September. Finally, the new model will give the conference the flexibility to push back the Big-12 Championship game to December 12th or 19th.

The Big Ten Conference was the first of the Power 5 to make the announcement that they would be moving to a conference-only schedule. When the Conference broke the news, it unfortunately meant the cancellation of one of the most highly anticipated games to ever be played at Autzen Stadium between Oregon and Ohio State.

Reports suggest that the Big Ten is planning to come out with a revised conference schedule at some point on Tuesday. In addition, Ohio State quarterback Justin Fields (a projected top-5 pick in next year’s NFL Draft) mentioned that a group of Big Ten players have been discussing the possibility of creating their own Unity Group, similar to what players in the Pac-12 began last week.

Justin Fields says there has been a group of Big Ten players who have discussed what the players in the Pac-12 have done, not necessarily trying to get a group together of their own, but have discussed the issues and what it would look like for them.

On July 29th, the ACC announced their plans to play an 11-game schedule for the 2020 football season. The season is set to kick-off during the week of Sept. 7-12, and the plan is the complete all 11 games (10 conference, 1 non-conference) during a 13 week stretch. The Conference also restructured it’s two-division format, and will play the 2020 season as one division.

Notre Dame will participate in the ACC’s 10-game conference schedule, and will be eligible to compete in the ACC Championship game.

Breaking: ACC football will begin Sept. 7-12 and the scheduling model will include 11 games (10 conference and one non-conference), the conference announced.

Notre Dame will also play a 10-game conference schedule and be eligible to compete in the 2020 ACC football Championship. pic.twitter.com/kgABxaV41j

Today, the SEC announced a revision to their preseason football schedule: