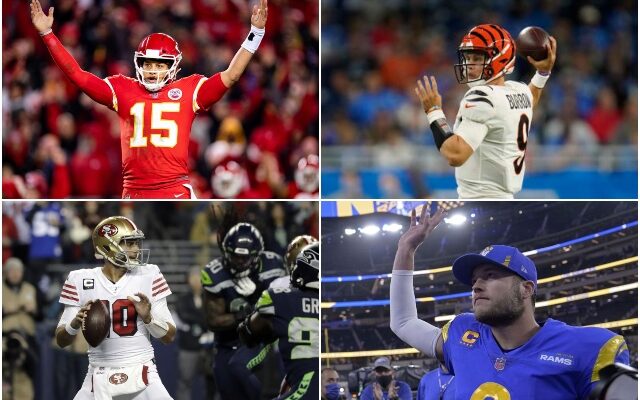 Patrick Mahomes, Joe Burrow, Jimmy Garoppolo, and Matthew Stafford lead their teams into what should be an exciting Championship Sunday (AP Images)

There may not have been, or ever will be, another weekend of NFL playoff games like what fans just witnessed in the 2021 Divisional Round.

Each of the four contests came down to a field goal on the final play of regulation.  Three of the four games saw the road underdog win, while the finale provided an overtime thriller for the ages.

That sets up Championship Sunday, where the Cincinnati Bengals visit the Kansas City Chiefs and the San Francisco 49ers visit the Los Angeles Rams.

The Bengals are making their first appearance in the conference title game since the 1988 season, thirty-three years ago.  That was also the most recent of two trips to the Super Bowl in their history, which they have yet to win.

The Chiefs are hosting the AFC Championship Game for a fourth straight year.  That is an NFL record for most consecutive conference title games as a host.  They are looking to advance to their third straight Super Bowl.

The 49ers are back in the NFC Championship Game after upsetting Aaron Rodgers and the one-seed Packers on the road.  San Francisco is in the title game for the second time in three years after having reached Super Bowl 54 in the 2019 season, where they lost a heartbreaker to the Chiefs.

The Rams will host the NFC Championship Game at SoFi Stadium, which also happens to be this year’s host site for the Super Bowl.  The Rams won a dramatic affair at Tampa Bay in the Divisional round, and like last year’s Bucs team, is trying to become the second team in history to play in a Super Bowl on their home field.  The battle of division rivals is a rematch of the regular season finale in Week 18 at SoFi Stadium, a game won by the Niners in overtime that punched their ticket to the postseason.

Here are the broadcast details for each contest this Sunday, and don’t forget, you can listen to every play of Championship Sunday and Super Bowl 56 right here on 750-AM The Game, your home of the NFL on Westwood One.