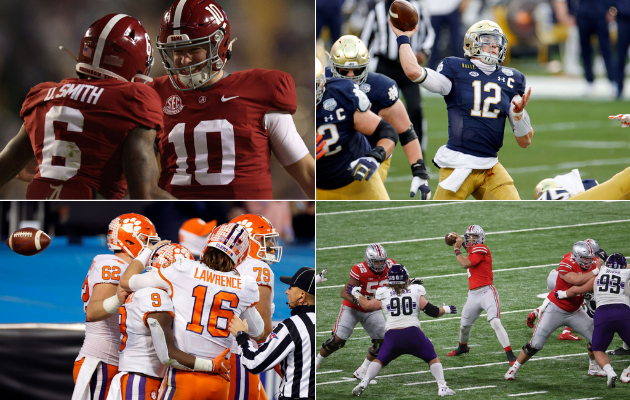 Normally when I write these previews I go down the rabbit hole of research and don’t know how I ended up wherever I end up. So, for the College Football Playoff semifinals, I’m just going to keep it simple.

Sadly for the Irish, I’m expecting something similar on Friday. Yes, Notre Dame is a better team than they were in 2013, but I don’t trust them at all after that abysmal effort in the ACC title game against Clemson.

Expect the Tide to cruise past the Fighting Irish.

The Tide should be able to do just about anything they want against the Fighting Irish.

Finally, ND spreads out with their receiving distribution. Javon McKinley leads the team with 40 receptions (77th in the nation) and 697 yards (37th) and is second on the Irish with three TDs (tied for 156th). Ben Skowronek leads ND in touchdown catches with five (tied for 67th).

If we get even a fraction of what we saw from last year’s instant classic between the Tigers and Buckeyes, I will be thrilled.

How can you not be excited? QBs Trevor Lawrence and Justin Fields. Running backs Travis Etienne and Trey Sermon & Master Teague III.

Inject this game directly into my veins. I’m so ready for this one.

The Tigers won’t have offensive coordinator Tony Elliott after he tested positive for COVID-19. So, if Clemson loses expect that to be a talking point for everyone as a reason they lost. If the Tigers win, it will be because they were able to “persevere” despite being without Elliott.

Just watch, I’ll be right about that.

As for the Buckeyes, they’re supremely motivated to beat Clemson. After last year’s collapse after leading 16-0, Ohio State wants revenge.

This game should be as good if not better than last year. Lawrence and Fields should be the top two quarterbacks taken in the 2021 NFL Draft, should they both leave college.

Clemson RB Travis Etienne is one of my favorite players to watch regardless of position. This guy is a problem for every team he faces, and it’s the same for Ohio State.

I don’t know a lot about the Buckeyes RBs, Trey Sermon or Master Teague III, but the little I have seen … my goodness they’re pretty damn good too. In their five games, Sermon and Teague have collected a ton of yards.

Sermon finished in the nation’s top 50 (48th) in rushing yards (675) despite playing six fewer games than pretty much everyone else. Teague collected 449 rushing yards and six rushing TDs, which led the team in ground scores.

Honestly, I expect this game to be another instant classic.