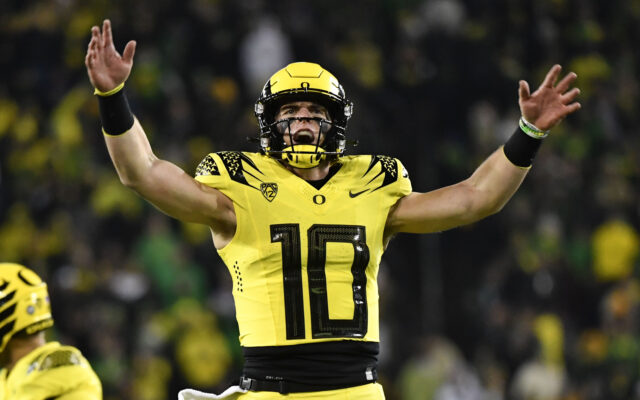 The finalists were selected by the distinguished Johnny Unitas Golden Arm Selection Committee, a group of prominent college football journalists, commentators, announcers, and former players. The Golden Arm Award annually recognizes the top senior or upperclassman quarterback set to graduate with their class. Candidates are chosen based on player performance on-and-off the field.

» Leads the nation with a 72.8 completion percentage, and ranks fifth with a 173.16 passer rating.

» Leads all Pac-12 players and all FBS quarterbacks with 14 rushing touchdowns, tied for sixth in the nation.

» 14 rushing TDs are second-most in a season by an Oregon quarterback, just one shy of Marcus Mariota’s record of 15 (2014).

» One of just three FBS quarterbacks since 2000 with at least 24 passing touchdowns and 14 rushing touchdowns through a team’s first 10 games, joining Lamar Jackson (2016, Louisville) and Jalen Hurts (2019, Oklahoma).

» Joined Bowling Green’s Josh Harris (2001) as the only FBS players since at least 1996 to have two passing TDs, two rushing TDs and a receiving TD in the same game (at Colorado).

» One of just two quarterbacks in the nation with at least 2,500 passing yards and 500 rushing yards (Drake Maye).

» One of three FBS QBs this season with double-digit TDs both passing and rushing (Jayden Daniels & Riley Leonard).

» The only FBS quarterback this season with three games of three rushing touchdowns (vs. BYU, at Arizona, at Cal).