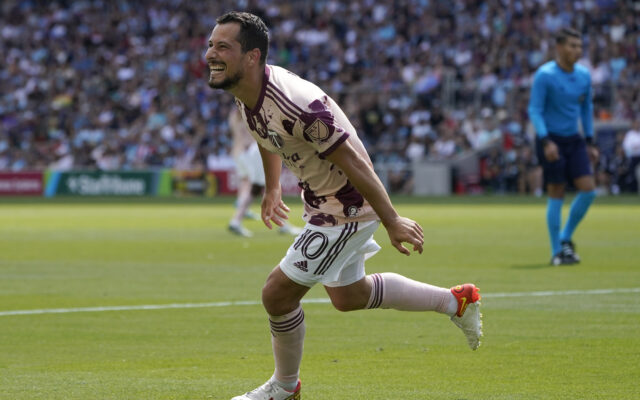 Sebastian Blanco scored the fastest goal in club history, putting the Timbers in front thirteen seconds into the match, helping push Portland to a wild 4-4 draw at Minnesota United on Saturday afternoon on 750 The Game.

Blanco’s goal was also the 4th-fastest goal scored in MLS history.  Jake Zivin was on the play-by-play call of the moment that happened in the blink of an eye.

Minnesota would equalize in the 9th minute, then add two more in the first half to turn the match on its head and take a 3-1 lead going into halftime.

But Portland responded impressively out of the halftime break, and it was Blanco once again behind the surge to cut into the deficit in the 50th minute.

The Timbers were not done, as the road side kept pushing in the moments following Blanco’s brace, finding the equalizer in the 53rd minute with Jaro Niezgoda putting the finishing touches.

With the match stunningly tied again at 3-3, the Timbers kept the foot on the gas pedal, and it was Blanco putting on the pressure to put Portland back in front with a third consecutive goal, an own goal on Minnesota, narrowly missing history as the first player in club history with a hat trick.

The own goal came in the 65th minute, but Minnesota finally got up off the mat to find their own second half goal in the 69th minute to equalize 4-4.

Portland is on 31 points through 23 matches played.  Their run of 3 matches in 8 days began Saturday in Minnesota, and continues next Wednesday hosting Nashville SC at Providence Park, before hosting FC Dallas next Saturday night.