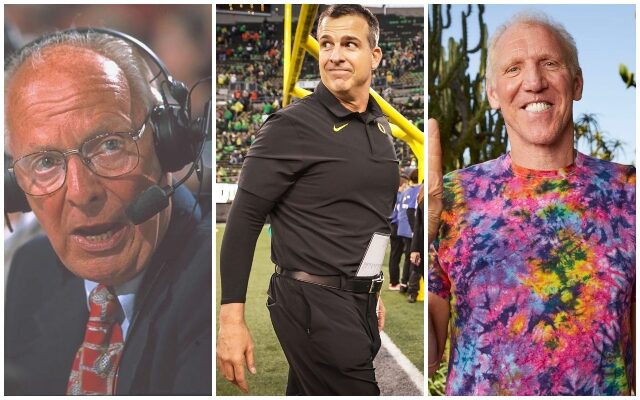 Bill Schonely, Mario Cristobal, and Bill Walton were each part of some of the top moments from John Canzano's Bald Faced Truth radio program in 2021.

This week, we have been revisiting some of the best conversations of 2021 on John Canzano’s Bald Faced Truth (Weekdays 12-3pm).  From the Mayor of Rip City, Bill Schonely, calling in on his 92nd birthday in June, to the recent drama with Joey Harrington and the Ducks letter to Rob Mullens earlier this month, to new Pac-12 Commissioner George Kliavkoff’s first interview after replacing Larry Scott, to Bill Walton epically, and simply, being himself, there were plenty of riveting and memorable moments from the BFT this year.

Below are ten of the top conversations from the show this year.  We are looking forward to even more great interviews and memorable moments in 2022, and we sincerely thank you for listening every step of the way.

In one of the most epic moments of local sports radio in Portland, Mario Cristobal called in to the station hours removed from news breaking that he was leaving Oregon to take the head coaching job at his alma mater, the University of Miami.

The conversations John Canzano and Bill Schonely share are always memorable.  In this appearance, The Schonz called in on his 92nd birthday, and went down memory lane of some of his favorite memories in Blazers broadcasting including the 1977 NBA Championship.  He also shared what a good birthday looks like at ninety-two years young, and how he continues to root for the Blazers every game.

The Larry Scott era officially ended in 2021 as the Pac-12 Conference finally ushered in new leadership.  George Kliavkoff was announced as the new Pac-12 Commissioner in May, and the day he was introduced, he called in to the Bald Faced Truth alongside University of Oregon President Michael Schill, the Chair of the Pac-12 CEO Group, for an exclusive interview with John Canzano.

In one of most unexpected, Cinderella-like stories our state has ever seen, the Oregon State men’s basketball team caught fire at the end of the 2020-21 season.  The Beavers won the Pac-12 Tournament, earned a 12-seed in the NCAA Tournament, then upset 5-seed Tennessee, 4-seed Oklahoma State, and 8-seed Loyola-Chicago to punch a ticket to the Elite Eight in Indianapolis.  Despite falling just short of a Final Four, we savored every moment of the Beavers dramatic run.  Hours before facing University of Houston in Elite Eight, OSU head coach Wayne Tinkle joined John Canzano live from Indy on the Bald Faced Truth.

One of the greatest to ever wear the green and yellow, LaMichael James stopped by to reflect on his Oregon Ducks career, reminisce on what it was like being coached by Chip Kelly, assess the highs and lows of his NFL career, and break some news on the show regarding his next professional venture.

There was plenty to celebrate in Corvallis this football season, as Oregon State won seven games and played in a bowl game for the first time since 2013 under Mike Riley.  Beavers head coach Jonathan Smith made weekly appearances all season on the BFT, and this appearance took a celebratory tone following OSU’s win over Stanford to clinch bowl eligibility.

It is one of the greatest partnerships in sports.  The Bill Belichick-Tom Brady-led New England Patriots won five Super Bowls, appeared in 13 AFC Championship Games, and were the spotlight of the NFL world for two decades.  But their relationship had reported fractures, leading to Brady’s eventual split to join the Tampa Bay Buccaneers whom he guided to yet another title in 2021.  ESPN writer Seth Wickersham wrote a new book this year on the Brady-Belichick relationship and the “Patriot Way”, where it went awry, and he joined Canzano to discuss it.

After Mario Cristobal’s sudden departure, concern arose from all corners of Ducks alumni, boosters, and fans as to the direction of the program.  For the second time in five years, a sitting Ducks head coach up and left Eugene for another job deemed to be his dream opportunity.  Former Oregon QB great Joey Harrington penned a letter that was signed by himself and thirteen other Ducks football alumni including Marcus Mariota and Justin Herbert, and sent it to Oregon AD Rob Mullens during the search for the next Oregon head coach, urging Mullens to not sacrifice what makes Oregon special for the sake of chasing a big-name head coach and a possible national championship.  While Harrington states the letter was not intended for public consumption, John Canzano obtained it and published it on OregonLive, deeming it newsworthy.  Harrington called into the radio show to discuss the letter, his issues with Canzano choosing to publish it, and why he thinks the program still made the right hire in Dan Lanning.

There is no conversation on the BFT quite like the annual appearance of Dave ‘Softy’ Mahler from Seattle’s KJR sports radio the week of the Oregon-Washington rivalry game.  This particular appearance featured a downtrodden, distressed, disappointed, and depressed Softy, but nevertheless entertaining, as the Huskies were struggling mightily under then head coach Jimmy Lake.  Lake, who took a shot at Oregon in his press conference earlier in the week, would be fired a few days later after losing to the Ducks where he was seen physically reprimanding a player during an on-field altercation.

There is never a wrong time to have Bill Walton call into your radio show.  The legendary Blazer big man and broadcaster extraordinaire talked to John and Anna about a host of topics this early spring day including his relationship with the recently passed Steve ‘Snapper’ Jones, the impact of playing for John Wooden, the success of the Pac-12 “Conference of Champions” in the NCAA Tournament, and much, much, MUCH, more…

What a year.  We can’t thank you enough, the listeners, for your companionship throughout 2021, and look forward to more time spent together in 2022 and beyond.

Tune in to The Bald Faced Truth with John Canzano weekdays 12-3pm on 750 The Game, and streaming on 750TheGame.com and on the iHeart, Audacy, and TuneIn mobile apps.