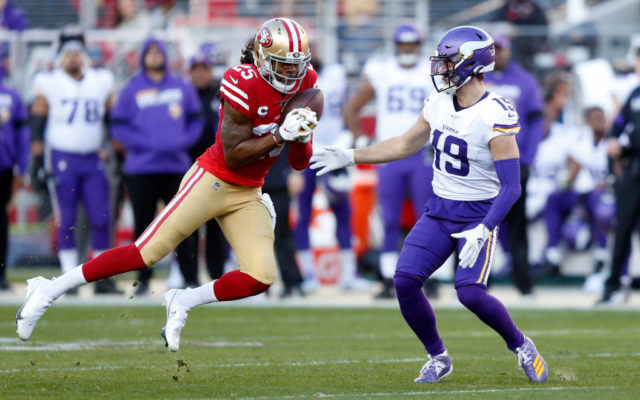 The first half wasn’t exactly back-and-forth, but the game was close between Minnesota and San Francisco in game one of the Divisional Round weekend. However, the second half was all 49ers.

Tied at seven, and going to the second quarter, the Vikings had a chance to take their first lead. Kirk Cousins and the offense went backwards (3 plays, -2 yards).

The 49ers took advantage of a good punt return to their own 47. Jimmy Garoppolo led a 10-play, 53-yard drive capped with Tevin Coleman’s first rushing touchdown to put SF up 14-7.

Another Minnesota three-and-out and a Garoppolo pick later, the Vikings scrambled for a field goal just before halftime. The Niners led 14-10 at the break, and that was the closest the visitors got the rest of the game.

San Francisco drove down to start the second half, but they were forced to settle for a field goal. Down just seven meant Cousins and the Vikings had a chance to get even again. Nope.

On the third play of the drive, Cousins threw a pick right to former Seahawk Richard Sherman. Eight plays and 44 yards later, Coleman was in the end zone celebrating his second rushing TD of the day; 24-10 49ers.

The Vikings ensuing possession saw the offense’s fourth three-and-out, but the defense was able to force San Francisco’s second punt of the game. The problem? Marcus Sherels muffed the punt, and the Niners recovered. Minnesota’s defense held SF out of the end zone, but add another FG; 27-10 49ers.

After trading punts on four straight drives, the Vikings turned the ball over on downs when Diggs dropped a deep pass. The Niners took over, and tried to get a 4th and one to officially seal the game away, but Matt Breida fumbled.