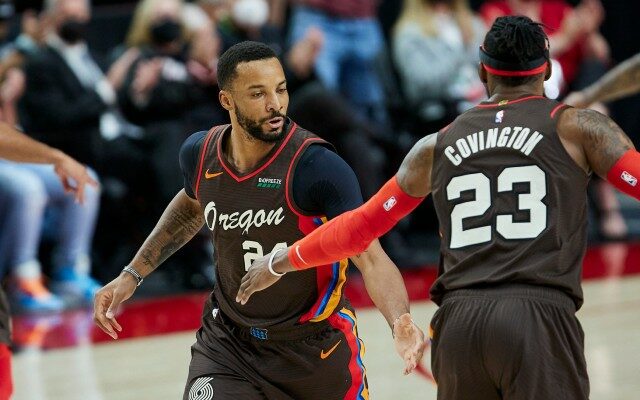 The Portland Trail Blazers are officially sellers.  Well, at least as the roster is concerned.

Still with a week to go to the NBA trade deadline (Feb. 10th), the Blazers have agreed on a trade with the LA Clippers that sends Norman Powell and Robert Covington to Los Angeles for Eric Bledsoe, Justise Winslow, Keon Johnson, and a future second-round draft pick.

Bledsoe is on an expiring contract, and could be moved again before the deadline next week.

Winslow is in the first of a two-year contract signed with the Clippers last offseason.

Johnson, 19, was drafted 21st overall by the New York Knicks in last year’s draft, and was traded to the Clippers.  In his rookie season, Johnson has seen action in fifteen games, and has averaged 3.5 points a game.  He is a 6′ 5″ guard.

Woj notes the future pick Portland is getting in the deal is a 2025 second round pick from Los Angeles via the Detroit Pistons.

The move also brings Portland under the luxury tax, per Woj.

The Clippers are 27-27 as of this trade, currently the eight-seed in the Western Conference.

The Blazers currently sit as the ten-seed, the final play-in spot, in the Western Conference as of this reported trade, with a 21-31 record.