Wilson, Metcalf Come Up Clutch as Seattle Sneaks Past Vikings Late to go 5-0 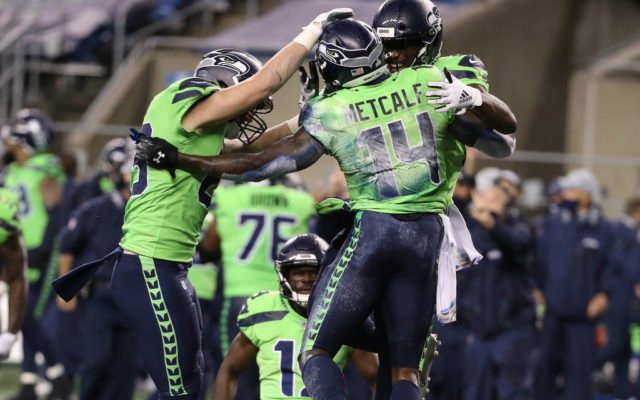 Sunday Night was not pretty, but a win is a win. The Seattle Seahawks move to 5-0 for the first time in franchise history with a pair of comebacks against the Minnesota Vikings.

Russell Wilson and Seattle’s offense looked as bad as they’ve looked in 2020, and they trailed 13-0 at halftime.

Wilson was frustrated. Brian Schottenheimer was getting out-coached. It looked bad, especially against a below-average Vikings team.

Then, suddenly the Hawks went from down double-digits to up eight.

Seattle and Minnesota traded punts to start the second half. Wilson made quick work of the next drive with a four-play, 58-yard drive in a 1:42 drive finally got the Seahawks on the board with a 19-yard TD pass to Will Dissly.

Three plays from scrimmage later, Seattle recovered a fumble. DK Metcalf made his presence felt with a 13-yard touchdown reception two players after the fumble.

On the next Vikings play, Kirk Cousins threw an interception. Chris Carson followed Cousins INT with a 29-yard TD rush for the Seahawks third TD in less than three minutes. 21-13, Seattle.

However, Minnesota would not go away. Cousins marched the visitors down the field (77 yards in 11 plays) to come within two points. The two-point conversion failed, keeping Seattle up 21-19.

Head coach Mike Zimmer decided to go for it on fourth down from Seattle’s 9-yard line instead of kicking a field goal to go up nine. His decision is still being criticized on Monday.

Fourth down and 10. It’s okay. 39-yard completion from Wilson to Metcalf.

First and goal from the Vikings 6-yard line, 32 seconds left. Three more incompletions to bring up fourth down and goal, 20 seconds to go. Final timeout Seattle.

Did you hear that at the end of the play? It was the collective exhale from Seahawks Twitter, and Seahawks fans across the country.

Seattle did not play its best game, and fortunately they didn’t need it. However, they’ll need to watch the film and adjust so other teams can’t take advantage of the Hawks defense like the Vikings running game did.

The Seahawks get Week 6 off for their bye before their first divisional game in Week 7 at Arizona on Oct. 25.

As DK Metcalf has been ending his press conferences, I’ll end this recap.