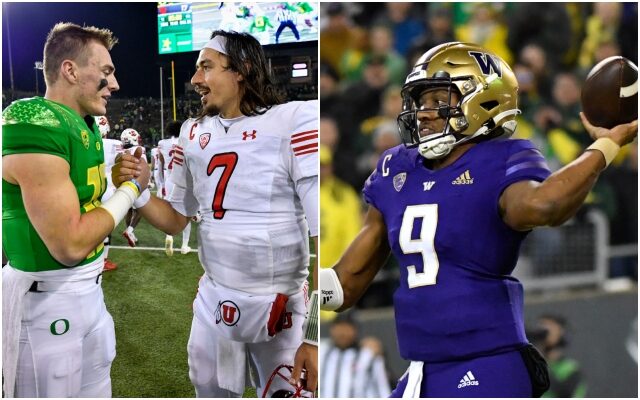 Bo Nix and Oregon are in the driver's seat, but Cam Rising and Utah and Michael Penix, Jr. and Washington remain in the hunt to meet USC in the Pac-12 Championship Game (AP Images)

Entering the final week of the regular season, the matchup for the Pac-12 championship game remains at large.

One seat is claimed, as Caleb Williams and CFP-No. 7 USC edged rival No.16 UCLA 48-45 at the Rose Bowl to finish the conference schedule at 8-1.  The Trojans host No. 13 Notre Dame on Saturday night but know their next stop will be Las Vegas on their quest for the College Football Playoff.

USC’s opponent will either be the Oregon Ducks, Utah Utes or Washington Huskies.

Oregon got a hard-fought 20-17 win over Utah on Saturday night in their home finale, and go to Corvallis this Saturday for the rivalry showdown at Oregon State.

The Ducks (9-2, 8-1 Pac-12) will punch their ticket to the Conference Championship game with a win over the Beavers.

An Oregon State win opens the door for a possible three-team tie for the second conference seed.  Utah would be the likely benefactor in that scenario, with Washington also in the mix should they beat rival Washington State on the road in the Apple Cup.

Here are the scenarios to land Oregon, Utah, or Washington in the Pac-12 Championship Game to face USC.

The kickoff times for the final Pac-12 regular season week are as follows: