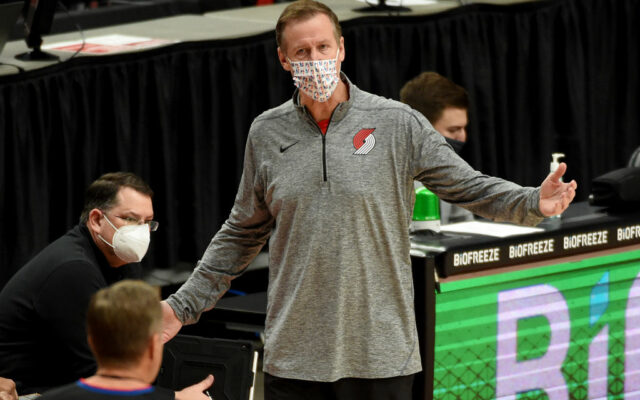 He may not get to play a lot in the regular season, but when he does Giles will give Portland everything he’s got.

The 22-year-old took it to his former team in back-to-back preseason games.

The former first-round pick is behind a logjam of big guys on Portland’s roster, and that doesn’t even include Zach Collins yet.

Head coach Terry Stotts was pleased with Giles’ contributions, but he also didn’t mince words with the rotation expectations.

“It’s a little too early” is probably the most important takeaway but Terry Stotts did address how Harry Giles III fits into the rotation after two preseason games… pic.twitter.com/A1Da9YbuER

He’s been fun to watch in preseason, but like I said before the first game, we also got really excited about Mario Hezonja … and we all know how that worked out.

The two big newcomers, Robert Covington (aka RoCo) and Derrick Jones Jr., have looked nice in their first action with Portland.

In both games, Covington scored nine points while Jones scored 15 points. During Portland’s win in game No. 1, both Covington and Jones each had a steal and a block. In game No. 2, Jones had the only steal between the two, neither had a block.

Obviously both guys didn’t play normal minutes — Covington playing 26 and 27 minutes, Jones playing 28 and 26 minutes — but I think we know what to expect when they get regular minutes: solid defense and effort.

Covington can shoot the three, Jones not as well. But what Jones lacks on the offensive end in terms of three-point shooting, he can make up for with cuts to the basket for alley-oops.

Also, with both players being plus-defenders, I think we can expect more fast break opportunities.

If you thought his deep shooting in the bubble was a fluke, Gary Trent Jr. told you to sit down.

Trent also continues to be the best defensive guard the Blazers have right now. He might not be able to lockdown any guard in the West, but he’s got the goods to bother and disrupt them.

If Trent continues on the trajectory he’s on, he’ll earn himself a big pay day in 2021. Obviously, fans (and the organization) would rather have Trent locked into a contract for the future, but he’s betting on himself and I can’t blame him.

Gary Trent Jr. says he intends to play the season out and become a restricted free agent rather than negotiate a contract extension. In a sense, this is him betting on himself rather than trying to nail down the security of a multi-year deal. Good incentive for him to play well

As a restricted free agent, Trent could sign an offer sheet with any team, but the Blazers would then have the opportunity to match the offer; otherwise known as the right of first refusal. If Portland a) still wants him and b) can afford his contract, I can’t imagine they’d let Trent just walk.

How nice was it to see Hoodie back? Man, I don’t know if I have the words.

As emotional as I was watching Jusuf Nurkic in the bubble was how I felt seeing Rodney Hood on the floor at Moda again.

He only played 12 minutes and shot 1-for-4, but Hood just being out there at all was so nice to see.

It’s so good to see Hoodie back 🥺 pic.twitter.com/EDwCeEthQO

Hood expects to have a minutes restriction to start the season. We’ll see how long he needs to get back into full game shape.

Given the injury he suffered (torn Achilles), we have plenty of players to look at for how they recovered, and we’ll be watching how Kevin Durant recovers too.

The best example would probably be former Blazer guard Wesley Matthews. He was hurt in March 2015 and was able to play at the start of the 2015-16 season, and log 78 games.

The one negative about Matthews is his shooting hasn’t been as good as it was pre-injury, which is to be expected.

So, Hood’s overall future remains a question, but for 12 minutes on Sunday we got to see him back in a Blazer uniform.

Portland wraps up their preseason this week before the regular season starts next week.

The Blazers head to Denver for a pair of games against the Nuggets. The two Western Conference foes play Wednesday and Friday, tip-off scheduled for 6 p.m. PT for both nights.

The regular season starts for Portland on Dec. 23 at the Moda Center against the Utah Jazz.