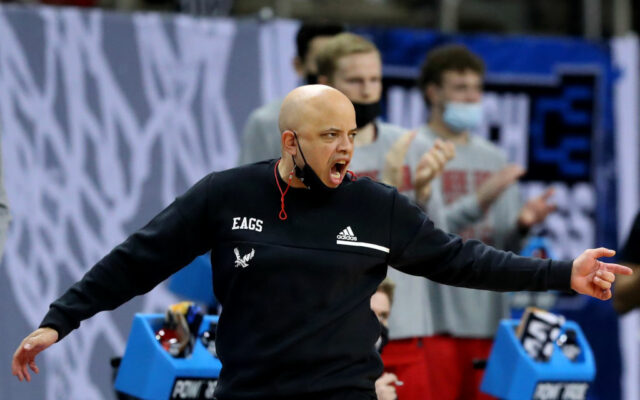 The University of Portland wasted no time hiring Shantay Legans away from Eastern Washington after the Eagles season ended.

On Saturday, EWU lost to Kansas. Now, on Monday Legans says so long as the Eagles head coach. Legans spent the last 12 years with Eastern Washington, eight years as an assistant and the last four as the head man.

In his four-year stretch as head coach, Legans collected the best overall (.605) and conference (.726) winning percentages in EWU men’s basketball history. The Eagles also won at least 12 conference games and finished third or higher in the Big Sky each season under Legans.

“It is an honor to welcome Shantay to the University of Portland family,” UP Vice President for Athletics Scott Leykam said, via press release. “In the interview process, we shared the strong belief that the University of Portland very much has the potential to be successful in men’s basketball and we’re excited to realize that potential together. We were especially impressed with his ability to install a strong team culture, emphasize the importance of academic success and develop his student-athletes both on and off the floor. We’re extremely glad he is on board and look forward to working with him to provide the program with the resources needed to take the important next steps.”

Legans was the 2019-20 Big Sky Conference Coach of the Year. The team went 23-8 before COVID-19 shortened that season.

He’s also a finalist for two awards. First, the 2021 Skip Prosser Man of the Year, which goes to a coach who not only has success on the floor, but also shows moral integrity off the court. Second, the Ben Jobe Award, which is presented to the top NCAA Division I minority coach.

CollegeInsider.com will announce both awards’ winners on April 1.

“My family and I couldn’t be more excited about this opportunity at the University of Portland,” Legans said, via press release. “Through the process, I had a chance to get to know Scott, Jason and Father Mark, as well as members of the Board of Regents, and get a feel for their vision for the future of the UP men’s basketball program. Not only did our philosophies and values align, but I could feel the university’s support and commitment to winning in every conversation. That made my family and I feel very comfortable, and it became very clear to us how special a place Portland is, both the university and the community as a whole. This place has massive potential, and I am so incredibly honored and humbled to have been chosen to lead the Pilots into the next chapter. We are going to win here, and I can’t wait to get to Portland and get to work!”