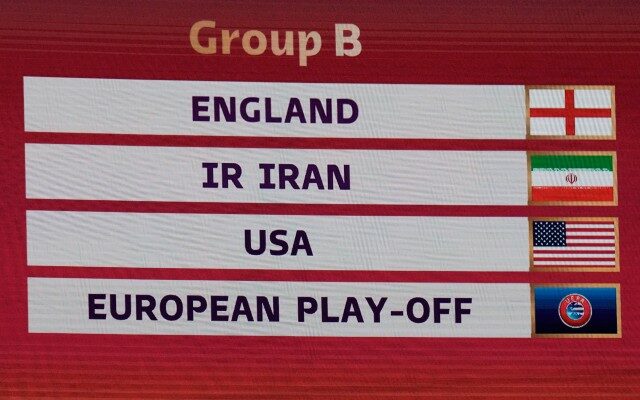 The United States draws England, Iran, and the winner of the final European playoff in the upcoming 2022 World Cup in Qatar (AP Images).

The U.S. Men’s National Team will face England, Iran, and one of the trio of Wales/Scotland/Ukraine at the 2022 World Cup in Qatar this November.

The United States is part of Group B.  The draw was determined during Friday’s World Cup draw.

This is the first time since the 2010 World Cup in South Africa that the U.S. and England are in the same group.  Both nations advanced out of the group stage and into the knockout round that year.

The U.S. will open their World Cup run on Nov. 21st against the team-to-be-determined amongst Wales, Scotland and Ukraine.

The final group stage match for the U.S. will be against Iran on Tues., Nov. 29th.

Mexico is slotted into Group C and will face Lionel Messi and Argentina in that group, along with Poland and Saudi Arabia.  The Mexico-Argentina match will be each side’s second of group stage play, on Sat., Nov. 26th.