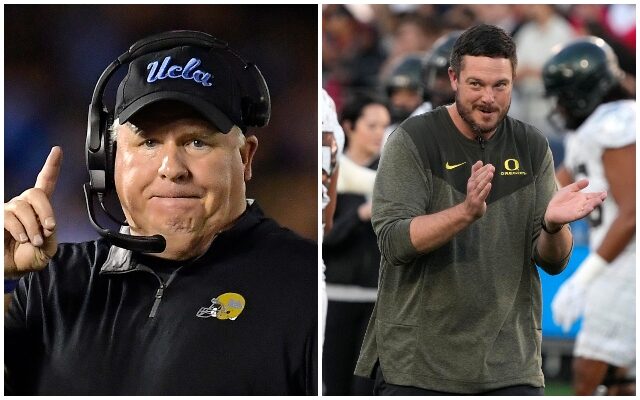 The latest AP Top-25 poll released for Week 8 of the college football season includes both UCLA and Oregon in the top-ten ahead of their showdown this Saturday at Autzen Stadium.

Chip Kelly’s Bruins are the top-ranked team in the Pac-12 entering Week 8, checking in at No. 9 in the poll.

Dan Lanning’s Ducks are ranked No. 10, the same place they were ranked in the preseason poll before their week one loss to then-No. 3 Georgia, now the No. 1 team in the country.

Oregon is also coming off a bye week and have won five in a row, with a 5-1 overall record and 3-0 conference mark.  Oregon snuck out a close win at Pullman over Washington State before soundly defeating Stanford at home and taking care of Arizona in Tucson.

ESPN’s College Gameday will broadcast its Saturday show live from Eugene on the University of Oregon campus as part of the festivities of the premier matchup.

This will be Chip Kelly’s third trip back to Autzen Stadium on the opposing sidelines, having done so in 2018 and 2020 as UCLA’s head coach, both Oregon victories.  Kelly was Oregon’s head coach from 2009-12 leading the program to previously unprecedented heights, including a trip to the BCS National Championship Game.