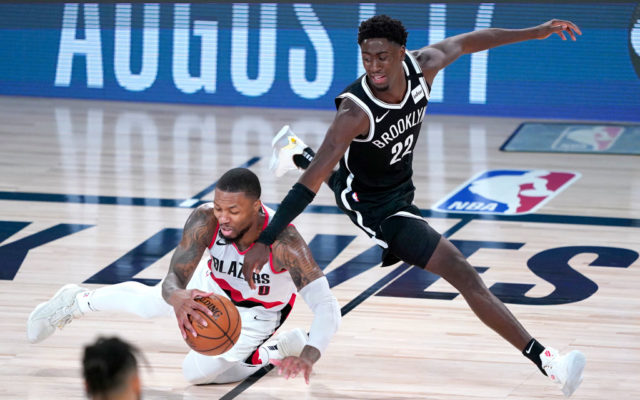 Damian Lillard was in rare form, even for him, in the final three games of the NBA seeding games.

In NBA history, only one player has scored 50+ PPG and 9 APG over a three-game span:

Joe Harris’ reaction gave us an inside look at what it feels like guarding Lillard.

Listen to what Joe Harris said while trying to defend Damian Lillard pic.twitter.com/kgMmCI9HJ2

Obviously on Thursday night, the logo shot and the steal had a lot of people talking.

That man just pulled up from half court 😂😂😂 @Dame_Lillard

Then, Garrett Temple gave his guys a stern suggestion…

I know I’ve said this before, but the NBA bubble is our greatest invention since the iPhone. I’ve spent my whole week drowning in CFB dysfunction, but I can turn on the TV and watch Damian Lillard hit midcourt shots on a Thursday night in August.

Do not take this for granted!

Attack each day with this level of confidence…💯 pic.twitter.com/tpAccqAcRQ

“Each time I saw a look… I was raising up and shooting it.”@Dame_Lillard on his logo shot. pic.twitter.com/7QdMWMuWL3

Good things come to those who hustle @Dame_Lillard | #RipCity pic.twitter.com/wIt0BEsUOB

The logo 3 is going to get the most run, but Damian Lillard, best I can tell, recorded the most important steal of of his pro career tonight when he straight up stole the ball from Caris LeVert in a two-point game with 70 seconds left.

As impressive as that logo shot was, that steal by Damian Lillard is the most impressive play by far tonight.

Just from the epic shots, the clutch performances, the confidence without arrogance, the ice cold candid interviews, the loyalty to the Blazers … forget what even happens the rest of his career — Damian Lillard is going to go down as absolute NBA icon.

What Damian Lillard did during the seeding games is something we’ll remember forever. What a special run.