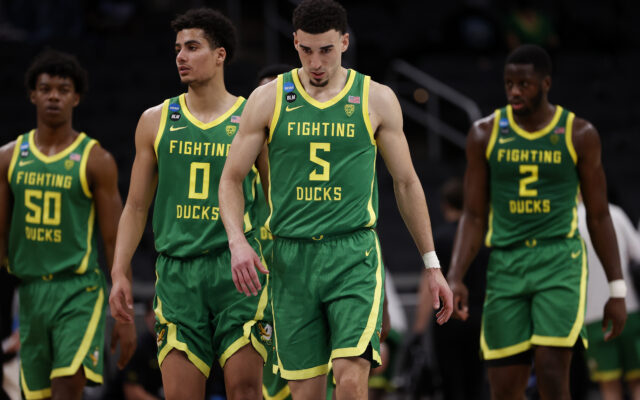 The final Sweet Sixteen match-up of the weekend between the No. 7 Oregon Ducks and No. 6 USC Trojans in the West region got underway with the UCLA Bruins and Oregon State Beavers already stamping their tickets to the Elite Eight. This meant that the Pac-12 would automatically have three teams representing the conference in the Elite Eight for the first time since 2001.

Oregon shot just 30.3% from the field in the first half, and it was the Trojans suffocating zone defense that gave them fits for most of it. USC was absolutely brilliant from the field in the first half, making 17 of 29 shots (58.6%) and knocking down 5 of 9 three-pointers (55.6%). The Trojans also dominated the glass with the big man Evan Mobley, holding a +7 defensive rebound advantage and limiting Oregon’s second chance opportunities.

USC went on a 24-6 run at one point during the first half to capture a commanding 41-26 halftime lead.

Oregon would need to have the best shooting half of their season in order to get back into the game. They began the second half hitting 7 of their first 12 shots, but the Trojans hot shooting from deep didn’t do them any favors. With 13:01 to play, USC held a 57-41 lead and seemed to be in full control.

In the first meeting between USC it was Tahj Eaddy having a career-game against Oregon. Now it’s Isaiah White and his four threes. He’s never made that many in a game in his career.

The Ducks found some life with increased defensive intensity and offensive execution, cutting it to a 9 point game with 3:58 to play. USC went scoreless for over five minutes before Tahj Eaddy nailed a huge three-point shot to give the Trojans a 72-60 lead and put an end to the Ducks 11-0 scoring run.

Eaddy’s shot would ultimately put an end to Oregon’s momentum as the Trojans continued to hit key shots down the stretch to prevent any hope of a comeback for the Ducks.

USC was in control for nearly the entire game, completing another double-digit win with an 82-68 victory over Oregon to advance to the Elite Eight. The Trojans have won all three of their NCAA Tournament games by double-digits and will face off with the top seeded Gonzaga Bulldogs for a shot at the Final Four on Tuesday.

The Pac-12 will have three teams in the Elite Eight for the second time in conference history.

For the second time in Conference history, we’ll see 3⃣
men’s teams in the #Elite8‼️