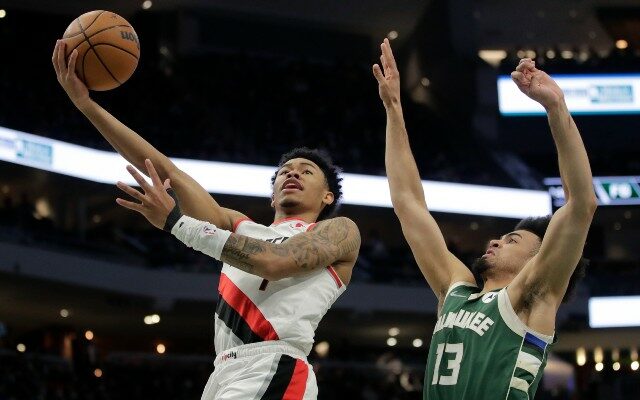 Portland has won three in a row after upsetting the reigning champion Milwaukee Bucks 122-107 on Monday.

In what might be the high point (low point?) of their season, the Portland Trail Blazers went on the road and upset the defending champion Milwaukee Bucks on Monday night, 122-107.

It’s the third straight win for Portland, despite many fans clamoring for a tank the rest of the season to increase likelihood of a top draft pick.

Instead, Anfernee Simons scored 31 points, newcomer Josh Hart added 27, Jusuf Nurkic and Justise Winslow each had double-doubles, and the Blazers took down the Bucks who played without star Giannis Antetokounmpo.

The Bucks were led in scoring by Jrue Holiday’s 23 points.

Trendon Watford starred off the Blazers’ bench with 9 points and 10 boards.

The Blazers led by as many as 21 points despite entering the contest as an 11-point underdog.

They visit Memphis on Wednesday in their last game before hitting the All-Star break.

After the break, Portland faces five straight opponents who currently are seeded above them in the Western Conference standings (vs Golden State, vs Denver, at Phoenix, at Minnesota 2x, at Utah).