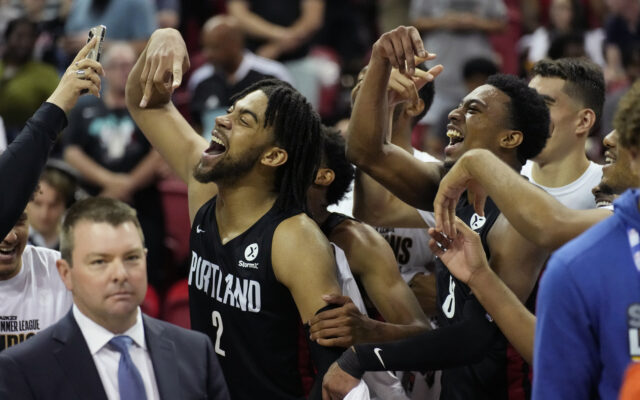 For the second time in four years, the Portland Trail Blazers are NBA Summer League Champions.

The Blazers beat the Knicks in the championship game Sunday afternoon in Las Vegas, 85-77, to win their second summer league title, and first since 2017.  It was the third title game appearance since 2017 for the Blazers, and they finished the job for another title, which this year, came with championship rings.

Portland’s defense helped stretch their lead to as many as sixteen points in the third quarter, 60-44.  Brandon Williams led the way in scoring with 22 points, but it was big man Trendon Watford who took championship game MVP honors with 19 points and 7 rebounds.

Portland also got strong bench production to the tune of 36 bench points, 14 of which came from second-round pick Jabari Walker, who added 11 rebounds and was a major bright spot to the summer league run.

With the objective complete, a major question still exists regarding the team’s No. 7 overall pick in Shaedon Sharpe.  Sharpe was supposed to be the primary focus entering Summer League, but the 19-year-old suffered a minor tear in his left shoulder just over five minutes into the summer league opener, and missed the remainder of the schedule.  Fans will have to wait until preseason to see what Sharpe can bring to the table.

The Blazers will open training camp in September, with the preseason opener scheduled for October 3rd against the Los Angeles Clippers in an exhibition game to be played in Seattle’s Climate Pledge Arena.