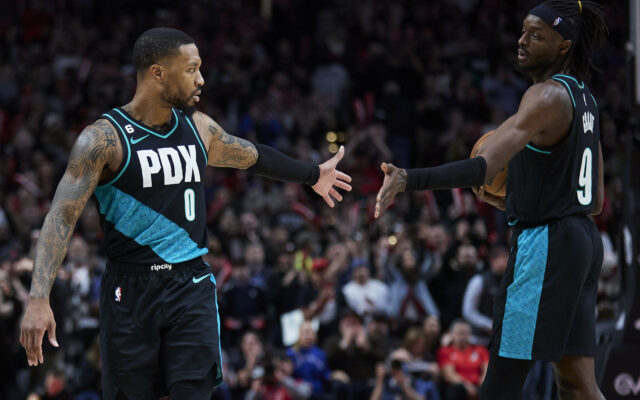 Jerami Grant may have led the Trail Blazers with 29 points, but it was Damian Lillard that swung the game last night.

In a tight contest that saw the Trail Blazers turning the ball over and struggling to defend the interior and the 3-point line, Lillard cam up with the defensive play of the night – stopping Devin Vassell in the post – before hitting a deep 3-pointer on the very next possession.

Despite his late game burst, it wasn’t Lillard that paced Trail Blazers in scoring, but Grant and Anfernee Simons (23). With the lessened offensive load, Lillard was better able to pick his spots on both sides of the floor.

It wasn’t easy for Portland. Spurs big man Jakob Poeltl had a career-high 31 points and 14 rebounds. Vassell had 21, and Keldon Johnson chipped in 20. The Trail Blazers also continue to struggle with unforced turnovers, racking up 15 in total, including three straight possessions in the third quarter.

Despite this, Portland finds itself all alone atop the Western Conference standings, a half-game ahead of Denver. The Trail Blazers next host the Brooklyn Nets on Thursday at 7pm.