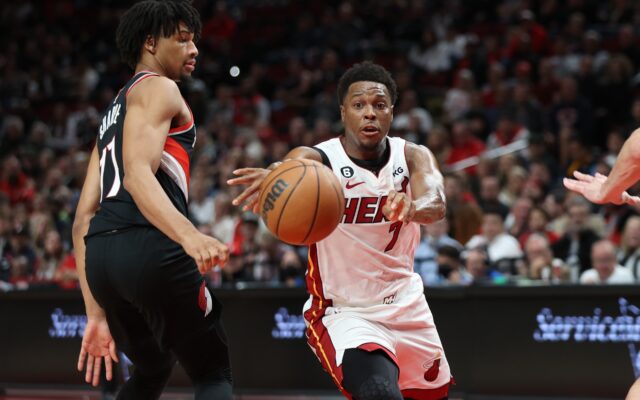 It turns out that the Trail Blazers are not, in fact, going to go 82-0 this season.

After a stellar four game start that had the basketball world buzzing, the Trail Blazers struggled their way to a 119-98 loss to the Miami Heat.

Miami, only 1-3 entering Wednesday night’s game, did a great job dirtying up the game and playing their style; playing physical, getting into passing lanes, and grinding seconds off the shot clock before getting a good luck. Bam Adebayo led six Heat players in double figures with 18 points. Although the Heat don’t appear to be a strong defensively as last year with the loss of P.J. Tucker, they looked locked in on that end of the floor. Caleb Martin, returning from a one-game suspension for initiating an altercation with Toronto’s Christian Koloko, played particularly aggressive defense – locking up Anfernee Simons and Damian Lillard during his shifts.

Lillard still managed 22 points before leaving the game midway through the third quarter with a right calf strain. Lillard told reporters after the game that it wasn’t an acute injury and that, while if it was a playoff game he would have continued, there was no sense in forcing the issue so early in the season. With that in mind, expect Lillard to miss Friday’s game against the Houston Rockets. There are two reasons for this; first, Houston is a beatable team even without Lillard. Secondly, the Trail Blazers have a four-game break after that game, next playing the Memphis Grizzlies on Wednesday. That gives Lillard a full week off to recover while only missing a single game.

With their first loss, the Trail Blazers are now tied with the Utah Jazz for the top record in the Western Conference.