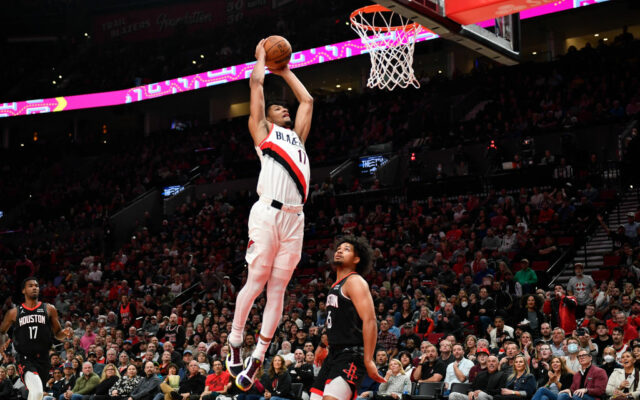 PORTLAND, OREGON - OCTOBER 28: Shaedon Sharpe #17 of the Portland Trail Blazers goes for a dunk during the second quarter against the Houston Rockets at the Moda Center on October 28, 2022 in Portland, Oregon. The Portland Trail Blazers won 125-111. NOTE TO USER: User expressly acknowledges and agrees that, by downloading and or using this photograph, User is consenting to the terms and conditions of the Getty Images License Agreement. (Photo by Alika Jenner/Getty Images)

The Portland Trail Blazers are not only winning tough games against tough teams, but they are doing it while playing a fun style.  The Trail Blazers have started the season 5-1 on the season with their only loss to the Miami Heat, but the Blazers have a tough week ahead and the unknown if their star player will be in the lineup.

Damian Lillard strained his calf in the loss to the Heat at the Moda Center, and is was estimated that he would miss 1-2 at least.  The Blazers next game is Wednesday against the Grizzlies from the Moda Center and it is unlikely that Dame will suit up for that one.  The Grizzlies are coming into to town with all star Ja Morant and former Duck, Dillon Brooks.

But it doesn’t get any easier playing in the tough Western Conference.  After the game on Wednesday the Blazers will head out on the road and take on the Suns in Phoenix on Friday.  Then turn around and play the Suns again in Phoenix on Saturday.  The Suns were the #1 seed in the West a season ago.  But the positive for the Blazers is that one of the Blazers wins this season was against the Suns.  So even if Dame is to miss one or both of those games.  The Blazers have the confidence knowing they have already beaten the Suns.