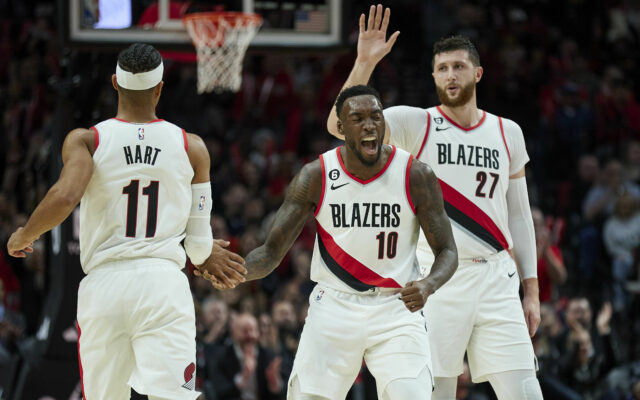 Tonight, on the second night of a back-to-back, against the reigning two-time MVP, Portland hung tight for two quarters, before turning on the afterburners and handily beating Nikola Jokic and the Denver Nuggets 135-110.

The win moved Portland to 4-0 on the season and, like their three previous wins, it featured a different hero. While Jerami Grant stole game one against Sacramento, and Damian Lillard and Josh Hart came up big each of the next two games, tonight was Anfernee Simons’ turn to be the star. Suffering an early season shooting slump, Simons (29 points) erupted in the third quarter – hitting eight straight shots (six of them 3-pointers) to break the game wide open.

Damian Lillard, fresh off being named Western Conference Player of the Week for his back-to-back 41 point outings, continued his run of stellar play with 31 more.

For all of his skill, Nikola Jokic struggled against former teammate Jusuf Nurkic. The Trail Blazers swarmed Denver’s big man down low, while driving right at Jokic offensively, baiting him into foul trouble early and often. Jokic finished with nine points, nine rebounds, and nine assists in 27 minutes of play. Nurkic had 13,12, and six in 35 minutes of action.

With the Utah Jazz and Boston Celtics both losing Monday night, the Trail Blazers join the Milwaukee Bucks as the last two unbeaten teams in the league. The last time the Trail Blazers started a season 4-0 was 1999. That team won 59 games and reached game 7 of the Western Conference Finals.

Up next for the Trail Blazers: a well deserved off day on Tuesday, before hosting the Miami Heat from Moda Center on Wednesday night.