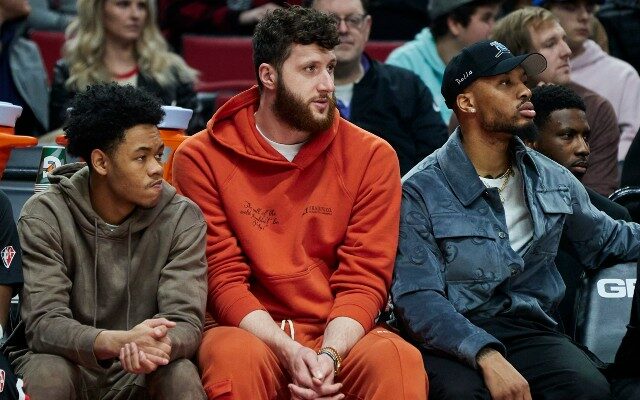 The Portland Trail Blazers announced injury updates on Monday for a handful of players, including center Jusuf Nurkic and guard Anfernee Simons, both of whom will not see the court the rest of the regular season.

Nurkic played and started 56 games this season, averaging 15.0 points, a career-high 11.1 rebounds, 2.8 assists and 1.1 steals per game.  He has not played since the All-Star break.  The team says Nurkic played through symptoms of plantar fasciitis this season before being shut down, and that he is responding well to his rehabilitation program.

Simons has missed the last 11 games with patellar tendinopathy in his left knee, and will now also miss the final eight games in the regular season.  Simons impressed in his 57 games of action, including 30 starts, led by a career-high 17.3 points a game and a 40.5 % 3-pt clip.

Guard Josh Hart will need another week before being re-evaluated for his own patellar tendinopathy.  He has missed the last four games.

Guard Eric Bledsoe will officially miss the remainder of the regular season.  Bledsoe received a PRP injection last week to address tendinopathy in his left Achilles tendon.  He has not played a game for the Blazers this season after being acquired from the Clippers in a trade on Feb. 4th.

Guard/Forward Didi Louzada is expected to return to game action at some point over the final eight games.  Louzada underwent surgery on  Feb. 4th to repair a torn meniscus in his left knee.  He has not played a game for the Blazers this season after coming over in the trade with the New Orleans Pelicans..

The Blazers sit fourth from bottom in the Western Conference with a 27-47 overall record.  They host the Oklahoma City Thunder (21-53) on Monday night.