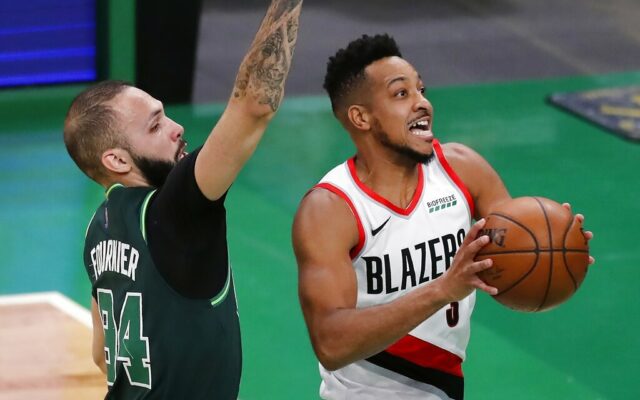 The Portland Trail Blazers look like a different team than they did a week ago after yet another victory, this time a 10-point win in Boston on Sunday night.

All five Blazer starters scored in double figures, three hit 20-plus. CJ McCollum led the way with 33 points, including 10 in the fourth quarter.

Damian Lillard and Jusuf Nurkic each compiled a double-double. Lillard finished with 26 points and 13 assists, while Nurk collected 14 points and 11 rebounds.

Norman Powell was efficient early, and he finished with 23 points on 8-of-15 shooting, 4-for-6 from deep. Robert Covington rounded out the starting five with 10 points.

Carmelo Anthony had some big shots in the second half, including nine of his 13 points.

Boston (34-31) got within one early in the fourth quarter, 107-106, but Portland responded with back-to-back three’s from McCollum and Melo.

The Celtics would not go away and got within two (121-119) with just over a minute to go. However, Boston would not score again, while the Blazers would tack on eight more points to win, 129-119.

Jayson Tatum came off a 60-point night on Friday against the Spurs and scored 24 in the first half. The second half was a different story, he only scored nine points.

Damian Lillard checking Jayson Tatum basically the entire second half after is really something. Blazers have come a looooong way since last Sunday.