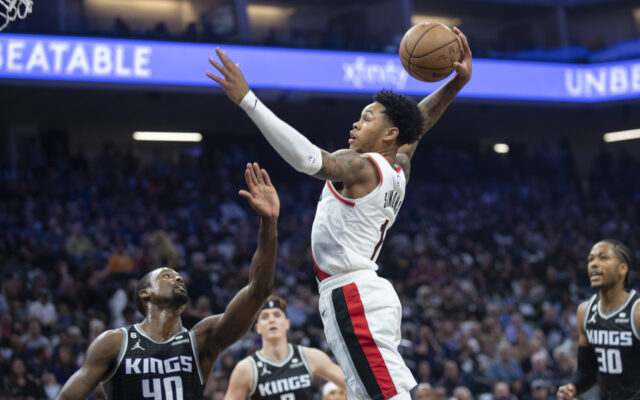 After an offseason of uncertainty and a preseason that soured the outlook of even the most optimistic fan, the Trail Blazers won their season opener against the Kings 115-108 due to hustle, defensive pressure, and players other than Damian Lillard coming up big.

Lillard struggled to find his shot, going 5-18 from the floor. Although his shot was off, Lillard did play a better than usual brand of defense and dished out eight assists.

But Lillard’s teammates picked up the slack, with a balanced effort up and down the roster. New forward Jerami Grant had 23 points and eight rebounds in his Trail Blazers debut. Josh Hart put up a stellar 19 point, seven rebound, five assist night while shooting 8-11 from the field. And Anfernee Simons showed that he can, in fact, coexist with Damian Lillard, scoring 22 points on the night.

But it was the Trail Blazers defense and scrap that turned heads. Although the team still struggled at allowing 3-point shots, the Trail Blazers swarmed passing lanes, challenged shots, and picked pockets all night, finishing with 11 steals leading to 20 fast break points – a gargantuan number for a team that has focused on playing in the half court over recent seasons.

The Kings mounted a solid challenge, but De’Aaron Fox, who finished with 33 points, missed several key shots down the stretch.

Up next for the Trail Blazers, they head to Moda Center for their home opener against the Phoenix Suns on Friday night.

Rookie Shaedon Sharpe made his NBA debut, playing 16 minutes and scoring 12 points on 3-3 from beyond the 3-point line.

The Trail Blazers overcame a poor night from Jusuf Nurkic by going ultra-small, with Justice Winslow at center. Winslow responded 11 points, eight rebounds, and countless “right guy at the right spot” plays. Expect to see more of this, especially late in games.