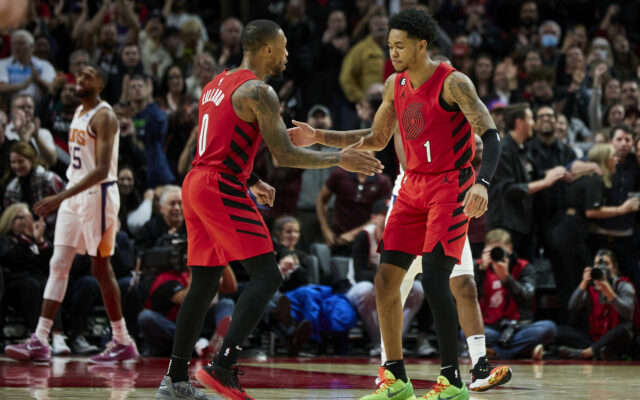 Damian Lillard is back.

Sure, he told us he was healthy. He even played substantial minutes in preseason, and scored 20 points in The Trail Blazers’ opener against the Kings. But Friday night, Lillard reminded everyone just who he is when healthy; a top-10 NBA player with a flair for the dramatic.

Lillard scored 41 points, 28 of them in an electric first half, to will the Trail Blazers to a stunning 113-111 win over the Phoenix Suns on a night that was seemingly the inverse of Wednesday’s win.

On that night, Lillard struggled to find his shot while his teammates came though in the clutch. Tonight, it was virtually all Dame-time for long stretches as the Trail Blazers role players struggled to find open looks (or any looks at all, as evidenced by Jerami Grant’s first field goal attempt coming early in the third quarter).

But down the stretch, Lillard got just enough help from his teammates. Anfernee Simons (16 points) overcame a brutal 5-17 night to hit the game-winning hook shot with seven seconds remaining. Jusuf Nurkic, who played himself off the floor on opening night, racked up 20 points and 17 rebounds in 35 minutes.

So far this Trail Blazers team has won both of their games with grit, hustle, and doing just enough to get the job done, and with a brutal stretch of games on the horizon, every win counts.

Over the next eight games, Portland faces the Lakers, Nuggets, Heat (twice) Grizzlies, and Suns (twice more). It was a reasonable assumption before the season that the Trail Blazers could go 1-7 in that stretch, with a sole win against the Houston Rockets. But now, having seen them find ways to steal wins in back-to-back games, anything can happen.

The Trail Blazers host the Lakers Sunday at 12:30p