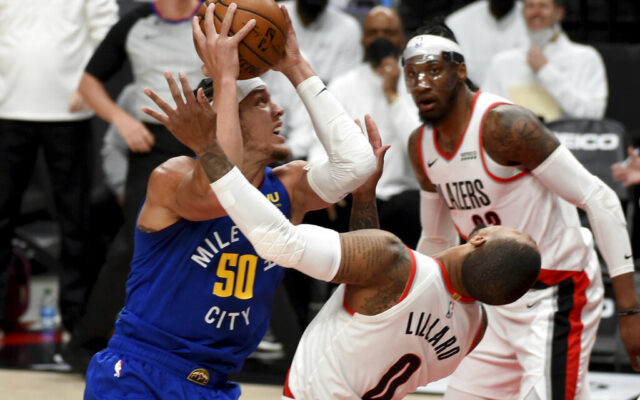 On the two-year anniversary of Damian Lillard’s “Bye Bye” game-winner against Oklahoma City, the Portland Trail Blazers are on the verge of saying goodbye to the No. 6 seed.

The Dallas Mavericks beat the Lakers on Thursday to “virtually” tie Portland. However, the Blazers own the tiebreaker with the Mavs. So for now, Portland is still the sixth seed out West.

If you forgot why that’s important, let me remind you. The NBA has a play-in tournament for the postseason as they try to recapture the buzz of the bubble’s “play-in game” from last year.

The big difference? The tournament isn’t just for the No. 8 seed. Teams in the No. 7-10 seeds in each conference will battle for the final two spots in their respective playoff brackets.

If you already understand the play-in tourney, feel free to scroll down to the next header “Trail Blazers Remaining Schedule.”

After the regular season ends, the teams in the No. 7 and No. 8 seeds will play each other. The winner earns the No. 7 seed.

The loser will have to win a game against the winner of the No. 9 seed versus the N0. 10 seed. The winner of that matchup would earn the No. 8 seed.

Confused? Sorry, but I think that’s as easy as I can explain it. Moving on!

As of this posting, Portland has 14 games remaining on the schedule. The only team they haven’t played yet is Memphis. Oh, and the Blazers face the Grizzlies three times in the next week; Friday, Sunday and next Wednesday.

The two teams were supposed to face off twice in January, but those games were postponed. So, what else does Portland have in front of it?

Six total home games that are totally broken up. They play Memphis on Friday and Sunday in the Moda Center before six straight on the road. Then a three-game homestand, a two-game roadie and the season finale at home.

Here’s how the schedule shapes up:

Portland is 5-12 against those teams. Here’s how the Blazers have done against each of their future opponents individually:

The worst part of the schedule could easily be the six game road-trip, but to me it’s the final three games. Portland is a combined 0-6 against their final three opponents (Utah, Phoenix, and Denver).

So, as you can see, it’s not shaping up to be a friendly end down the stretch. Portland gets teams that are all either in the playoffs or competing for a playoff spot, except for Cleveland and Houston.

From the West, the Blazers face six teams in the Top Nine; No. 1 Utah, No. 2 Phoenix, No. 4 Denver, the No. 5 Lakers, No. 8 Memphis and No. 9 San Antonio. Houston is already eliminated with the worst record in the NBA.

Portland has the seventh toughest remaining schedule, according to Tankathon.com. Their opponents have a .540 combined winning percentage.

If the Blazers manage to come out of this 14-game stretch 7-7 or better, honestly I’d be surprised. That’s not to say I don’t believe in this team, but simply they haven’t really won games against good teams.

All of Portland’s opponents have a reason to fight them for every single W, even Cleveland and Houston who want to play spoiler for teams above them.

On top of the seeding implications, the Blazers might be getting the Lakers as they get fully healthy. LeBron James is trying to return in the regular season — he’s doing “light work” right now — to warm up for the postseason. Anthony Davis just played on Thursday in his first game since Feb. 14.

Can Portland make the playoffs? Absolutely. Will they avoid the play-in tournament? Ehhhh. Dallas is already “tied” (again the Blazers own the tiebreaker); Memphis is 2.5 games back; San Antonio is 3 games back; and Golden State is 3.5 games back.

Now, is it likely that either the Spurs or Warriors catch Portland? No. However, both Dallas and Memphis could pass the Blazers if Portland struggles as much as they have so far this season against above-.500 teams.

Here’s the one thing you can’t measure: Damian Lillard’s drive. When Lillard plays his best — like when he was averaging over 40 points last season or when he won Bubble MVP — the Blazers can beat anybody.

Also, I can’t forget to mention CJ McCollum. He’s had a career-year in many respects, and he played some of his best basketball early on this season.

If Portland can just figure out its defensive issues, they’ll be a problem for their opponents. Unfortunately, that’s a continent-sized if.

It all starts Friday night against Memphis, and if the Blazers win that’s great, but sadly it’s just a good first step. They will need to keep winning because everyone in their way is hoping to wave goodbye to Portland.