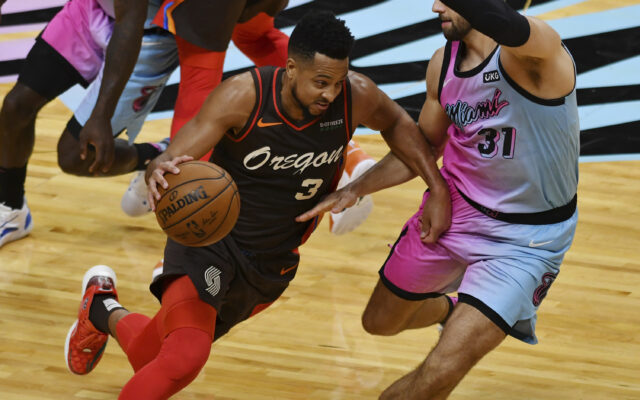 CJ McCollum and Damian Lillard noticed early on who had the hot hand in Miami. Spoiler: it was McCollum.

He was nearly perfect in the first half, 11-of-13 shooting including 6-of-8 from deep. McCollum had 29 at halftime, Lillard had just eight.

Lillard ended with 22 points — so 14 in the second half — including the final three points from the free throw line. Former Blazer Trevor Ariza fouled Lillard with one second left.

Dame hit all three free throws, and Portland’s quick two-game losing streak was over with a 125-122 win.

The Blazers backcourt was also delivering assists at a solid clip. McCollum had eight, while Lillard dished out nine.

Enes Kanter was massive for the Trail Blazers. He scored 18 points and collected 16 rebounds, nine of which came on the offensive end. He had a ton of put backs throughout the second half that really saved the win.

Also, a guy that deserves some credit: Robert Covington. He hasn’t had the season he hoped for personally, but the man hit some big shots. RoCo finished with 10 points — three made three’s — and six rebounds.

Portland (26-18) should get both newcomer Norman Powell, whom the Trail Blazers traded for earlier on Thursday, and Jusuf Nurkić, who revealed on Twitter that he’s coming back, on Friday against Orlando.