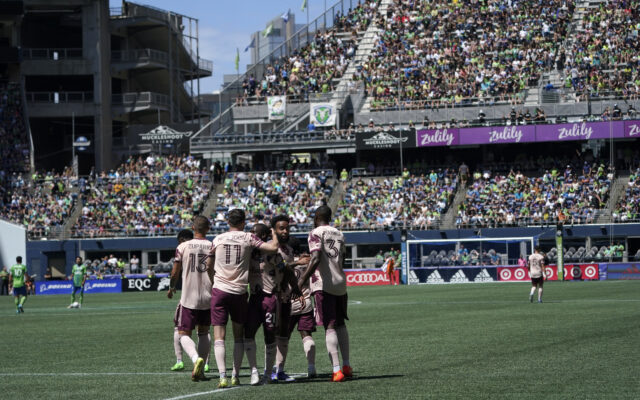 Portland Timbers forward Jarosław Niezgoda (11) celebrates with teammates after he scored a goal against the Seattle Sounders during the first half of an MLS soccer match, Saturday, July 9, 2022, at Lumen Field in Seattle. The Timbers won 3-0. (AP Photo/Ted S. Warren)

For the first time in club history, the Portland Timbers are set to compete in Leagues Cup, MLS and LIGA MX announced today. Portland, placed in the West 1 Group, will face LIGA MX side Tigres UANL and Western Conference foe San Jose Earthquakes. The summer tournament will be played from July 21 to August 19 with schedule and ticket details to be announced at a later date.

The group stage of the Leagues Cup tournament marks the entrance for 47 teams from the two top-tier leagues in the U.S. and Canada (Major League Soccer) and Mexico (LIGA MX). The tournament features 77 matches in four weeks during the summer where both leagues will pause their respective seasons. Every team will play two matches in the group stage, with the top two teams from each group, as determined by points, advancing to the Knockout Stage Round of 32.

Portland is set to face Mexican powerhouse Tigres UANL for the second time in club history. Portland has faced LIGA MX teams seven different times, including six friendly matches dating back to 2007 and in Concacaf Champions League play against Club America in May 2021. The Timbers last faced Tigres on July 15, 2008, defeating the Nuevo Leon-based club 2-0 in Portland.

The Timbers will also take on the San Jose Earthquakes for the 35th time across all competitions dating back to the 2011 MLS season. Portland leads the all-time series with 18 victories, seven losses and nine draws. Notably, the Timbers have won 15 times and only dropped one result against the Earthquakes (15-1-4) when playing at Providence Park.

Fans around the world will be able to watch Leagues Cup on MLS Season Pass on the Apple TV app, which is available on Apple devices, smart TVs, streaming devices from Roku, Amazon, and Google, game consoles, and the web at tv.apple.com. In addition, TelevisaUnivision, FOX Sports, TSN and RDS will be the linear broadcast home for select matches in Leagues Cup. The Leagues Cup Final will be available on Univision.