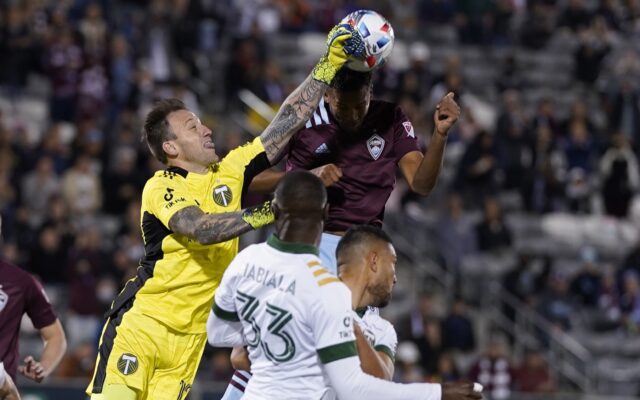 The Portland Timbers have now dropped three on the bounce after losing 2-0 to Colorado on Saturday night at Dick’s Sporting Goods Park. Before the October FIFA international break Portland had picked up 22 points from a possible 24; since MLS play returned Portland has yet to claim a point from three.

The Colorado match was Portlands third game in a week; Head Coach Giovanni Savarese elected to rotate the squad: Santiago Moreno was given his first of the season in place of Asprilla, Renzo Zambrano came in midfield replacing Paredes from the last game, Bill Tuiloma got the start at fullback, and most notably Timber legend Diego Valeri started his first game since July.

The first half was quiet for both sides with Colorado primarily controlling play. Without the burst that Sebastian Blanco provides Portland did not have great link-up play in the final third and would have been happy going into halftime with the game scoreless. Colorado had other plans, scoring a gut-wrenching goal deep into first-half stoppage time. Dominique Badji put the stoppage-time goal past Steve Clark from a strong downward header via a quality cross from Braian Galvan.

The goal suggested Portland was hopeless the rest of the game considering Portland entering the night was winless when trailing at halftime. That trend stood as Portland attempted to change personal and style but nothing worked as Portland finished the night with frustration instead of jubilation. Colorado ended up tacking on another goal in the 63rd minute when Diego Rubio scored his fifth of the season of a header at the near post.

Saturday night was the first time Portland has been shut out in 20 games. Perhaps being on the road is a major factor but the last time Portland and Colorado played, Portland competed with immense effort and passion playing with ten men and coming back from a goal down twice to capture a needed point last month.

Portland was out-possessed 62-38 and expected goals had the Timbers at a measly 0.3.

Portlands situation may get Timber fans nervous: stagnating at 46-points in the Western Conference sees them just two points clear from sliding below the playoff line. The good news, Western Conference teams around Portland in the standings like LAFC, Real Salt Lake, and The Galaxy all dropped crucial points on Saturday.

With three games left in Portland’s regular season, every game will be treated like a single-elimination playoff game with the Western Conference so close. The Timbers return home and host San Jose on Wednesday at 7 PM while Colorado looks forward to a heavy-weight meeting with New England on Wednesday.