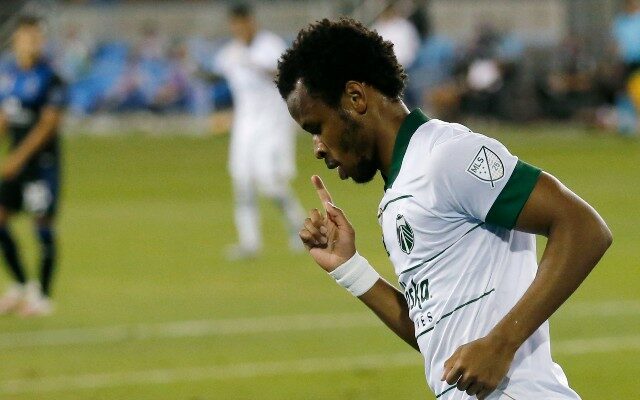 Portland Timbers forward Jeremy Ebobisse has been traded to the San Jose Earthquakes for over $1M in GAM (AP Images).

PORTLAND, Ore. – The Portland Timbers today announced that the club has acquired $667,000 in General Allocation Money (GAM) in 2022 and $500,000 in GAM in 2023 from the San Jose Earthquakes in exchange for forward Jeremy Ebobisse.

Selected by the Timbers as the No. 4 overall pick in the 2017 MLS SuperDraft, Ebobisse appeared in 88 MLS games (54 starts), tallying 26 goals and eight assists over five seasons. He played in 10 postseason matches (7 starts) for the club, tallying a goal and an assist.

“The decision to trade a player that’s had Jeremy Ebobisse’s impact can never be taken lightly. We know what he has meant to our team, club, and community. Our partnership with Jeremy has always been true to what’s best for all parties. This decision allows Jeremy to continue pursuing his career objectives while putting this club in a stronger position to manage its roster commitments going forward through acquiring a considerable amount of allocation money,” said Gavin Wilkinson, Timbers general manager and president of soccer.  “I want to thank Jeremy for everything he contributed to make the Timbers a better club on and off the field during his four-and-a-half years in Portland.”

In 2021, Ebobisse has appeared in 13 MLS regular season matches (11 starts), scoring four goals for the club. He finished the 2020 season tied for the team lead in goals (8) and tallied two assists for the Timbers after appearing in 18 regular season matches (11 starts). Across all competitions for Portland in 2020, Ebobisse tallied nine goals and three assists in 23 appearances (15 starts).

The Bethesda, Md., native was part of the squad that won the MLS is Back Tournament in Orlando, Fla. and the 2018 team that advanced to the MLS Cup Final against Atlanta United FC. Additionally, Ebobisse played on loan with T2 in 2018, the Timbers’ USL Championship affiliate, where he registered four goals and one assist in 18 appearances (12 starts).

Transaction: The Portland Timbers acquire $667,000 in General Allocation Money (GAM) in 2022 and $500,000 in GAM in 2023 from the San Jose Earthquakes in exchange for forward Jeremy Ebobisse. Portland will retain a small portion of the player’s 2021 salary budget charge.