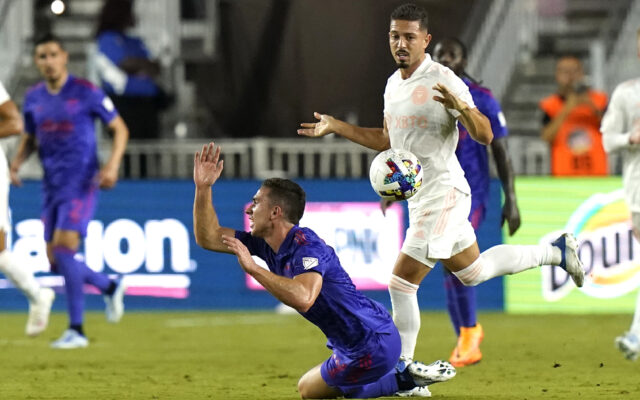 The Portland Timbers have exercised an option on forward Nathan Fogaça, the club announced today. Fogaça’s contract will see him through the 2023 season with an additional club option for 2024.

Fogaça, 23, enters his second season with the Timbers. Signed on May 5, 2022, Fogaça made his MLS debut for Portland on May 14, 2022, notching a brace to help lift the Timbers 7-2 over Sporting Kansas City at Providence Park. The seven goals scored by Portland in the match set a new club record, while Fogaça became the first player in Timbers’ history to register a brace in their debut. He finished the 2022 campaign with four starts in 11 appearances, logging 404 minutes on the field.

The Brazilian striker first joined T2 on April 22 via transfer from Brazilian side Coritiba. Fogaça posted two 90-minute performances with T2, tallying an assist on May 1st against Colorado Rapids 2 and converting his penalty kick in T2’s shootout against Real Monarchs on April 24. Prior to coming to Portland, Fogaça enjoyed a successful 2021 campaign in the USL Championship on loan with San Antonio FC. Fogaça recorded 34 appearances (30 starts) and tallied a team-best 13 goals and four assists for San Antonio. He helped lead San Antonio FC to the 2021 USL Championship conference final, scoring in both the conference quarterfinal and semifinal.

The Palmeira, Brazil native logged nearly 40 matches played across all competitions with Brazilian side Coritiba between 2018-2020. Notably, Fogaça made 12 appearances in Campeonato Brasileiro Série A in 2020 after Coritiba was promoted. He made his professional debut for Coritiba at the age of 18 in June of 2018, scoring his first professional goal just weeks later.