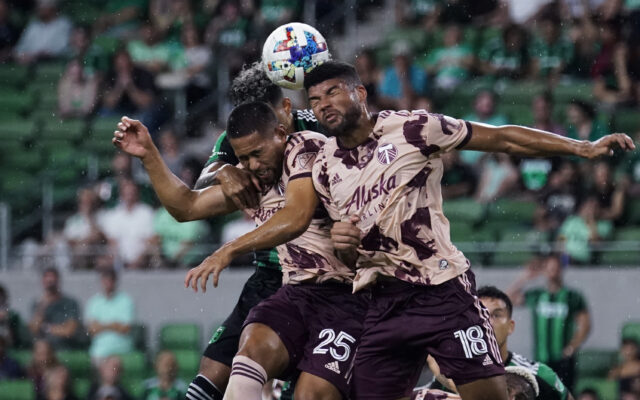 Portland Timbers defender Bill Tuiloma (25) and defender Zac McGraw (18) block out Austin FC defender Julio Cascante, rear, as they leap for the ball during the first half of an MLS soccer match Wednesday, Aug. 31, 2022, in Austin, Texas. (AP Photo/Eric Gay)

After a weather delay that lasted 102 minutes, Portland took care of business against one of the best sides in the MLS. Portland scored in each half and defeated Austin FC on the road, 2-1.

Bill Tuiloma began the scoring in the 16th minute after an aggressive start from the Timbers. Portland walked into the locker room leading 1-0.

In the second half, Zac McGraw scored his first career goal in the 73rd minute. Austin’s Sebastián Driussi quickly responded with a header goal in the 79th minute.

Portland survived 6 minutes of stoppage time to escape with three minutes. The Timbers won this game despite losing the possession battle 71% to 29%, and allowing 26 shots and 15 corner kicks.

With the victory, Portland moves to 39 points which puts them in sole possession of 7th place in the Western Conference. Portland will host Atlanta United on Sunday, September 4th at 2:30 PM.