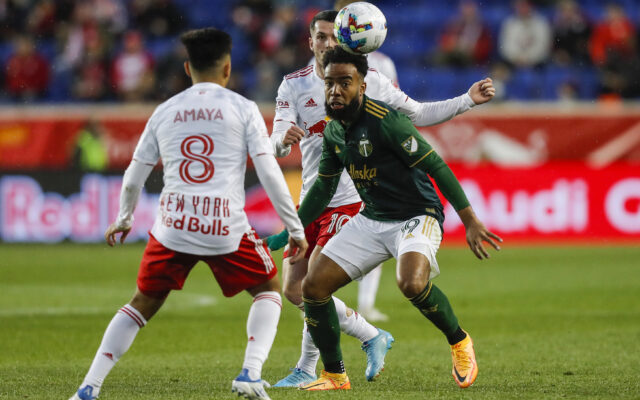 The Portland Timbers end their longest MLS goal-drought with a 1-1 draw with New York Saturday evening at Red Bull Arena.

Portland made three changes to the starting lineup to the side which fell 1-0 at Colorado last week and from the offset, the changes looked beneficial for Giovanni Savarese’s side.

Despite the match sitting scoreless after 45 minutes, each team played an attacking style with Santiago Moreno getting the best chance for the Timbers when he drilled the crossbar.

The home side outshot Portland 13-7 but Portland’s first shot on target broke the deadlock in the 53rd minute.

Jaroslaw Niezgoda’s strike was his third goal of the season and importantly ended a 335-minute goal drought that spanned back to a 3-2 win in Vancouver.

Portland was worthy of collecting three points but New York made the most of a corner kick in the 67th minute which Defender Aaron Long scored on. The Timbers adjusted and adapted well after the game went 1-1 but neither team mustered premier chances even with a plus-seven stoppage time.

After gaining a point, Portland now leads MLS with six draws from 11 matches. After a three-game road trip, Portland is back home next Saturday hosting Sporting KC.