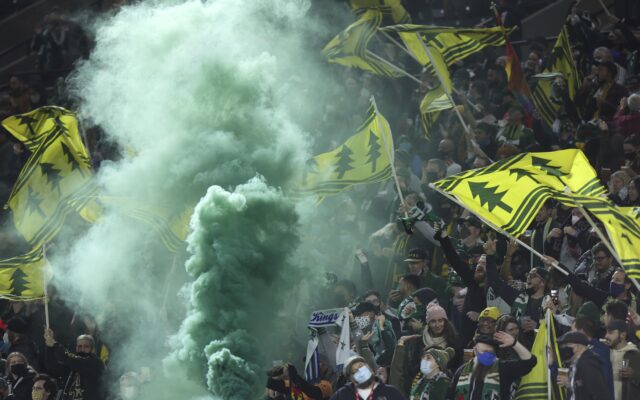 After a 77-day offseason, the Portland Timbers opened their 2022 MLS campaign with a 2-2 draw Saturday night at Providence Park against New England.

New England finished last season a league-record 73-points and they showed their strength in the opening half in Portland. The Timbers had a solid scoring opportunity in the 5th minute when Santiago Moreno was denied from short range. The Revolution grabbed the momentum after the Moreno miss and got on the scoresheet in the 41st minute when Brandon Bye scored a nice header from a corner.

In the second half, the Timbers looked energized nearly scoring in the first minute of the 45. Dairon Asprilla struck it hard but Earl Edwards Jr. made another great save.

Asprilla scored 10 times last season and Portland deservedly broke the deadlock when he picked out the left side of the net for the first Timber goal of the 2022 season.

Before the Timber faithful could even catch their breath, the Revolution was rushing down into the Timber’s defensive third. Sebastion Lletget, making his New England debut, got on the end of a pass during the attack and had a cultured finish to get the lead back for New England minutes after the Asprilla goal.

At last, Portland broke down the door when Yimmi Chara had the ball eke out to him close to the net and he finished with an audacious bicycle kick.

While Saturday night was the opener of the 2022 season, the attacking prowess for the Timbers liked they were in midseason form. Portland ultimately out-possessed the reigning supporters shield winners 55-45 and had the better of the chances.

Next on the docket is LAFC, who picked up all three points today behind a Carlos Vela hat-trick, on Sunday night at Banc of California Stadium.