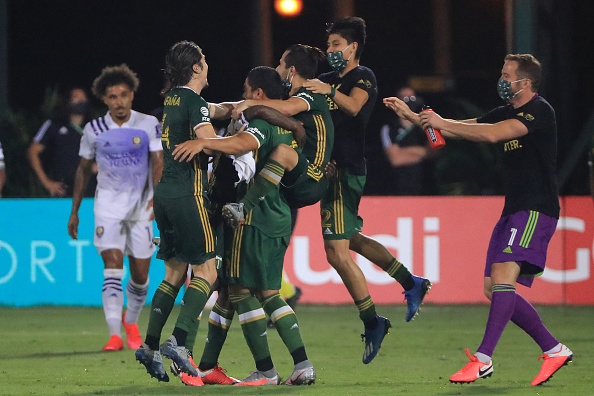 Major League Soccer today announced Portland Timbers midfielder Sebastián Blanco as the MLS is Back Player of the Tournament presented by adidas.

Blanco, 32, tallied three goals and tied for a tournament-leading five assists in helping the Timbers claim the MLS is Back Tournament title and a berth in the 2021 Scotiabank Concacaf Champions League. The Buenos Aires, Argentina, native finished tied for a tournament-high two game-winning goals, was one of 11 players to have played in every match (seven) and was the only player with three or more goals and five or more assists in the competition. Notably, his six consecutive matches with a goal or an assist during the tournament was the longest streak of his Portland career.

“I feel very happy about this achievement, but what makes me happier is that we were able to win the title,” said Blanco. “Everyone who knows me knows that I leave my heart in every match and that for me the team’s achievements overcome the individual ones. I receive this award at a very important moment in my career.”

Blanco kicked off the tournament with an assist and the game-winning goal in Portland’s 2-1 victory over the LA Galaxy on July 13. Days later, Blanco contributed an assist in the Timbers’ 2-1 win over the Houston Dynamo on July 18. Blanco registered yet another assist on July 23 in a 2-2 draw against Los Angeles FC to secure the top spot in Group F.

Of Blanco’s eight combined goals and assists, one goal and three assists came in the MLS is Back Tournament Group Stage presented by Heineken and count toward the regular season. Blanco’s three assists are tied for fifth in the 2020 MLS regular season entering return to play in home markets.

Blanco was joined by midfielders Sebastián Blanco and Diego Chara, forward Jeremy Ebobisse and defender Larrys Mabiala on the MLS is Back Tournament Best XI presented by BODYARMOR, with the tournament champions having the most players of any club represented in the Best XI.

Chara was one of three Portland players to start all seven matches in the tournament and one of two players to play every minute (630) in the competition for the club. Among all players, he was the only forward or midfielder to play all 630 minutes. Notably, Chara made his 300th appearance with the Timbers in all competitions during the tournament, which ranks as the most in club history.

Ebobisse scored a team-best four goals, which was tied for third most in the tournament, and registered an assist on Dario Zuparic’s game-winning goal in the MLS is Back Tournament Final against Orlando City SC on Aug. 11. He appeared in all seven matches, making six starts for Portland in the competition.

The Timbers will continue regular-season play against Cascadia-rival Seattle Sounders FC at Providence Park on Sunday, Aug. 23; kickoff is set for 7 p.m. (Pacific) on FS1.