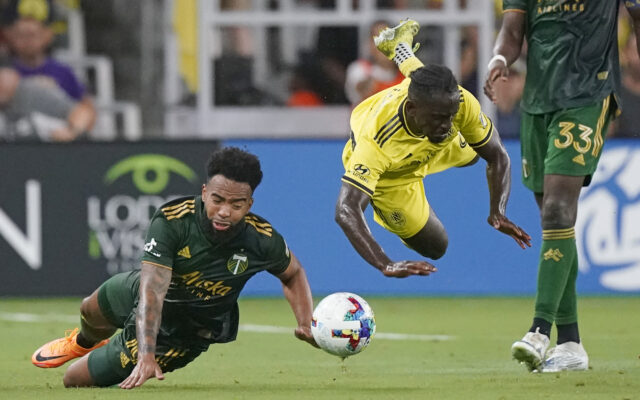 Portland Timbers' Eryk Williamson, left, and Nashville SC's Aké Loba fall as they chase down the ball during the second half of an MLS soccer match Sunday, July 3, 2022, in Nashville, Tenn. (AP Photo/Mark Humphrey)

Riding a two-game winning streak, Portland faced off with Nashville FC for just the second time in history. The Timbers overcame a 2-0 deficit on the road to earn one point in a 2-2 draw.

Nashville’s Sean Davis got the home crowd roaring early with a long-distanced goal in the 18th minute. Portland had some very good chances throughout the first half, but ultimately went into the halftime break trailing 1-0.

Nashville star Hany Mukhtar found the back of the net in the 57th minute and suddenly the Timbers were staring at a 0-2 hole.

It was at that point that Portland started to be the dominant side. Jaro Niezgoda was tripped by the goalkeeper in the 64th minute and Dairon Asprilla connected on the penalty kick.

Five minutes later, Niezgoda chipped the goalkeeper and suddenly the Timbers were level in the 69th minute.

Portland continued to be assertive over the final 20 minutes but couldn’t find the back of the net, settling with a 2-2 draw. This is Portland’s fourth straight result and the team will now look to keep the positive momentum going into a big match on Saturday, July 9th at Seattle.