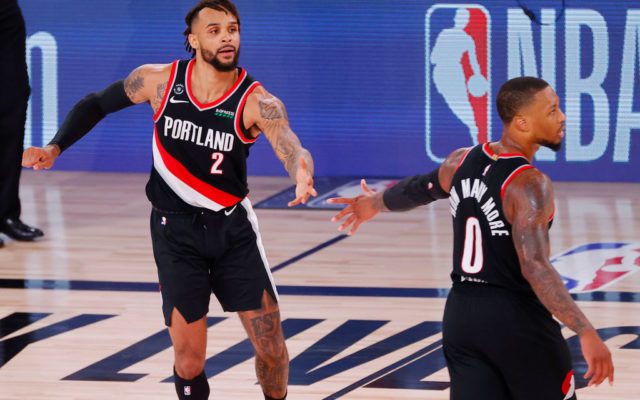 The battle for the No. 8 (and No. 9) seeds out West continue to be even more exciting than we thought, and it was already advertised as pretty exciting.

As you know by now, Portland held on late to beat Houston, thanks to some huge shots from the surging Gary Trent, Jr. and the future Hall of Famer, Carmelo Anthony.

Let’s just jump in to my takeaways, you don’t need a game recap.

When Trevor Ariza announced he wouldn’t join the Blazers in the bubble, fans immediately started wondering how Terry Stotts would replace the longtime NBA vet.

We all assumed Anthony would be the go-to small forward, and Anthony has started all three games in Orlando. However, Trent is the one filling in for Ariza’s absence on defense, and he’s holding his own on the offensive end as well.

Trent is averaging 18 points per game, which is almost 10 full points more than his season average (8.2). Yet, that’s not the most impressive stat for Trent.

Trent had 13 points at the half (tied for game-high at the time). He’s also provided plenty of clutch buckets, and he added to that in the win against Houston.

With the game tied at 100, Trent launched a three with a defender closing late, and he nailed it to give Portland the lead, which they wouldn’t give back, 103-100.

Portland Can Win Even With Poor Shooting

The Blazers and Rockets were not great in terms of shooting efficiency; Portland finished 39/95 overall (12/31 from three) while Houston shot 34/87 from the field (19/53 from three).

Yes, beating the Lakers and Clippers while shooting poorly would be difficult, but not impossible. Honestly, you never know how well or how poorly a team will shoot day-to-day or night-to-night.

The Blazers caught a break with Houston struggling after the Rockets beat Milwaukee on Sunday. However, the Rockets got lucky Portland shot poorly as well.

So, on Portland’s worst shooting night of their three games, they still won. Not something you want to make a habit of, but they’ll take the W.

Portland is a Threat

Yes, I realize I’m leading into this section after a “negative” section, and yes I know they lost to Boston. Just hear me out.

The Blazers are healthy. Jusuf Nurkic isn’t just back playing, he’s back to the Bosnian Beast. Nurk is averaging 22 points and 12.3 rebounds per game.

Zach Collins is averaging 7-and-7 (points and rebounds). Damian Lillard is doing Damian Lillard things (26.7 pts, 11 asts per game). CJ McCollum is hitting floaters and putting guys on skates. Carmelo Anthony is clutch. And on, and on and on.

I’ve said this in past posts, if I sound like a homer, I don’t care. I’m using logic, stats and the eye test to back me up.

Plenty of experts and former players also think the Blazers will give the Lakers, and others, a run for their money.

It could happen… #RipCity https://t.co/bE2YSnFjDJ

One, they beat a Rockets team that took out Milwaukee on bad shooting. Two, Lillard didn’t score a basket until the second quarter, and Portland had the lead even without a Dame bucket. Three and four, I already mentioned Trent Jr. and Portland winning despite bad shooting.

Finally, they’ve been there before. Last year, Portland reached the Western Conference Finals. This team knows how to win, they know what it takes to advance and they got a taste last season. You better believe they want the whole damn thing this time.