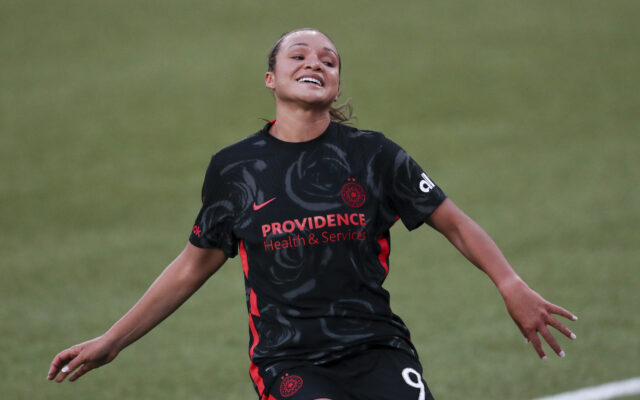 Portland Thorns FC forward Sophia Smith has been voted the 2022 U.S. Soccer Female Player of the Year, it was announced today.

Smith, 22, led the USA with 11 goals scored in 2022, making her the youngest player to lead the squad in scoring since 1993. She notched three braces and scored her first career hat trick on April 9 against Uzbekistan, becoming the youngest USWNT player since 2000 and the fifth youngest to net a hat trick in in USWNT history. Smith started a team-high 17 matches and logged the second most minutes played (1,192) for the U.S. in 2022.

“Obviously this is surreal, and I’m super humbled,” said Smith. “It’s been a very exciting year, and certainly there’s been some challenges, but just being able to grow and develop in the environments with the National Team and the Thorns, and being surround by such amazing players, players that I have looked up to for so long, has pushed me to become a better player and person.

“I’ve said many times, if you embrace these environments, you have no choice but to get better and grow, and that’s a testament to the players, coaches and all of the staff. I appreciate everyone holding me to such high standards day in and day out. This award wouldn’t be possible without all those people, and the best thing about it, is that it’s fun too. The journey is so much better when you are doing something so fun and something you love.”

Smith was tabbed 2022 NWSL MVP, finishing the season with 14 goals and three assists in 18 regular-season appearances. Her 14 goals finished as second best in the NWSL and set a new club single-season record, surpassing Horan’s 13 goals during the 2018 season. Smith finished the regular season tied for the most non-penalty goals (11) and the most goals plus assists (17) in the league.

During the 2022 NWSL campaign, Smith recorded four braces – tied for the most braces in a single season in NWSL history – and earned honors as an NWSL Best XI First Team selection. Smith was named the 2022 NWSL Championship MVP after scoring the game-winning goal to help Portland claim its league-best third title. Notably, Smith is the first player to earn both league and championship MVP in the same season.

Across all competitions, Smith scored a combined 29 goals in 42 appearances (40 starts) for club and country. With 11 goals for the USWNT and 18 goals for Thorns FC in 2022, Smith is just the fourth player to score 10 or more goals for the USWNT and her NWSL club in a single year, joining Abby Wambach (2013), Sydney Leroux (2013) and Christen Press (2015).