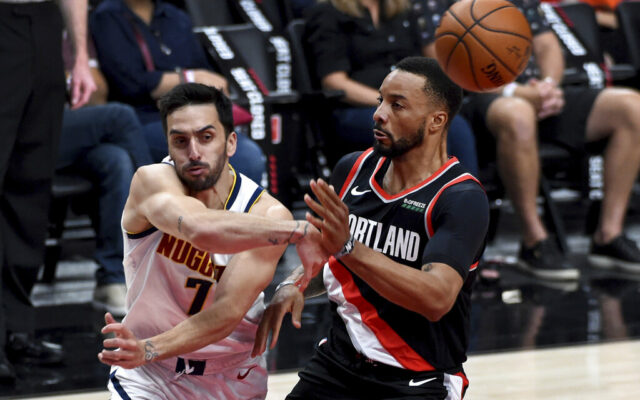 Powell started with 10 points in just seven and a half minutes without missing a shot (4-of-4 from the floor and 2-of-2 from deep). By the end of the game, he tied his playoff career-high with 29 points on 11-for-15 shooting. Powell also collected two rebounds, two blocks, an assist and a steal.

As mentioned, Lillard couldn’t get anything going from the floor. He shot just 1-of-10 overall (1-of-6 from three), but he still almost had a triple double; 10 points, 10 assists and eight rebounds.

CJ McCollum also picked up the Lillard slack with 21 points, eight assists and four boards. Jusuf Nurkić was also solid from the jump. The Bosnian Beast finished with 17 points (6-for-8 shooting), six rebounds, two blocks, an assist and a steal.

Denver tied the game at 36 with 7:30 to go in the second quarter. Portland never let the game get tied again.

In the end, the Trail Blazers never trailed and led by as many as 33 points to even the series at 2-2.

The TNT broadcasters couldn’t stop talking about Michael Porter Jr. in the first half. MPJ ended with three points on 1-of-3 shooting.

Nikola Jokić led Denver with 16 points in the loss.

Game 5 is back in Colorado on Tuesday (June 1) with a 6 p.m. PT on NBA-TV and NBC Sports Northwest.