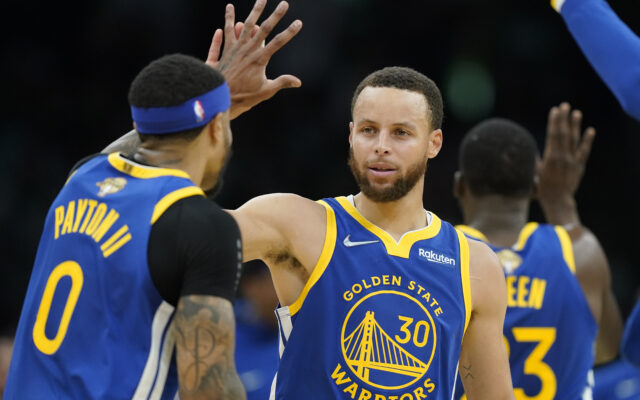 For a fourth time in eight years, Steph Curry and the Golden State Warriors are champions of the NBA.

Curry won NBA Finals MVP for the first time in his legendary career, as Golden State defeated Boston in Game Six on Thursday, 103-90 to finish the series 4 games to 2.

Locally, fans showed pride in former Oregon State star Gary Payton II, who played a key role off the Warriors bench to contribute to his first NBA Championship.  Payton II becomes the first former player of Beavers head coach Wayne Tinkle to win it all in the NBA.

I love it when a plan comes together!

The Oregonian’s Nick Daschel also points out Payton II joins his father Gary Payton as an NBA champion.  “The Glove” won the 2006 title with the Miami Heat.  They become the fifth father-son pair to win NBA titles, but they aren’t the only duo to have ties to the state of Oregon.

According a reader, Gary Payton and Gary Payton II became the fifth father-son to win an NBA title. They join: (Note 4 of 5 have ties to OSU/Blazers)

On May 3rd, Payton fractured his elbow when former Oregon Duck Dillon Brooks of the Memphis Grizzlies committed a flagrant-two foul on a fastbreak sending Payton to the ground.  The play drew reaction nationally, much of it directed critically toward Brooks, who was ejected.  Payton missed the rest of the Warriors second-round series and conference finals series against Dallas, before returning to action in Game Two of the NBA Finals on June 5th.