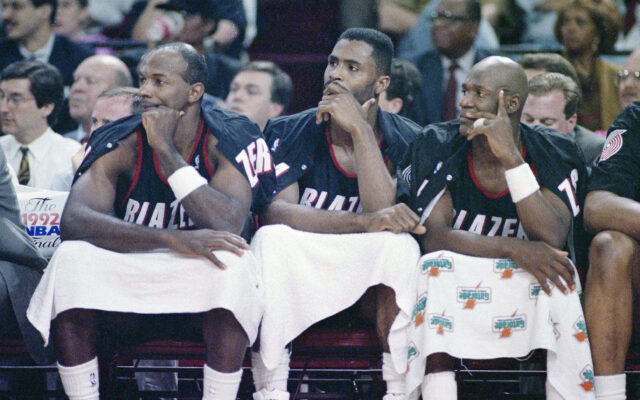 Portland Trail Blazers, from left, Clyde Drexler, Buck Williams and Terry Porter watch from the bench during the final minutes of Game 1 of he NBA Finals in Chicago, June 3, 1992. The Bulls beat the Blazers 122-89. (AP Photo/Fred Jewell)

The Trail Blazers announced that legendary Blazer, Terry Porter, is returning to the franchise as an alumni ambassador.  Porter will gather relationships with other alumni as the organization looks to enhance the alumni program.  He will also appear on pre, half and postgame shows.  As well as attend community events, engage with commercial partners and serve as a key resource for former players.  Porter joins current ambassadors Brian Grant and Bob Gross.  Porter spent 10 season in Rip City averaging 14.9 points, 7.0 assists, 3.5 rebounds per game for the Blazers.  He was the point guard for the team when he helped lead them to 2 finals appearances in the 90’s and he has his #30 hanging in the rafters at the Moda Center.