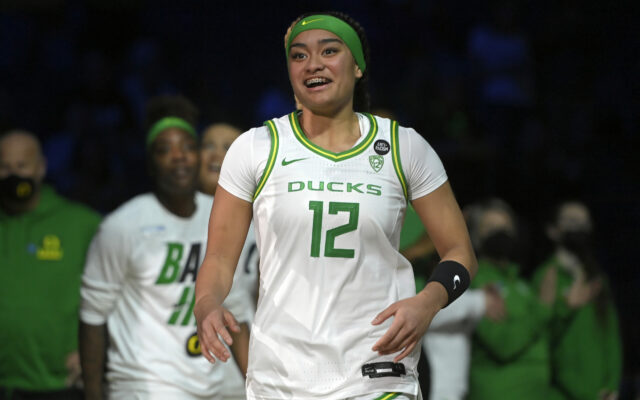 Oregon guard Te-Hina Paopao is introduced before an NCAA college basketball game against UCLA in the quarterfinals of the Pac-12 women's tournament Thursday, March 3, 2022, in Las Vegas. (AP Photo/David Becker)

LOS ANGELES — Oregon guard Te-Hina Paopao is among 50 players chosen to the preseason watch list for the prestigious John R. Wooden Award presented by Wendy’s, given to the nation’s most outstanding player, in a vote of national college basketball experts.

An all-Pac-12 selection in each of her first two seasons, Paopao has averaged 12.0 points, 3.8 rebounds and 3.8 assists per game while shooting 40.9 percent from the floor and 34.0 percent from three-point range through 45 career games.

The players on the list are considered strong candidates for the 2023 John R. Wooden Award Women’s Player of the Year presented by Wendy’s. Players not chosen to the preseason list are still eligible for the Wooden Award™ midseason list, late season list and the National Ballot. Nearly 1,000 voters will rank in order 10 of those 15 players when voting opens prior to the NCAA Tournament and will allow voters to take into consideration performance during early round games. The Wooden Award All-America Team will be announced the week of the Elite Eight of the NCAA Tournament. The winner of the 2023 John R. Wooden Award will be presented in Los Angeles in April.

Former Oregon superstar Sabrina Ionescu was a two-time winner of the Wooden Award, going back-to-back after the 2019 and 2020 seasons, and is the only Duck to earn the player-of-the-year honor.